A window with a view

1968 and the western world is on the brink. Reporter John Cassellis (Robert Forster) is on the front lines. He is seeing the sedition and insurrection but is unable to capture it on film. He feels enraged by activities of damage against his equipment. Foiled in his task, he is on the outside of public rage but inside he boils. The death of Bobby Kennedy has also left its mark on the mass and as the funeral begins, the cameras gather round to absorb the pain. Two young boys dream of freedom as birds fly. They are on the lower rung of society but still hope for better. Breeding birds, playing games and hiding from social services inform their identity and their future place in this world. Violence is everywhere and so is that roving eye, that unblinking retina in which we all see and all fear. 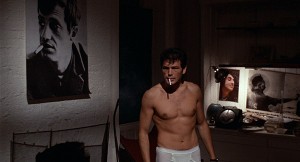 Reflected in a mirror

Much has been made of Haskell Wexlers Medium Cool in its almost 50 year exsitence. It has been applauded as a great renegade of film form and a mark of high quality in the early new wave. It has also been marked as the film to merge the templates of both fiction and non fiction cinema. Breaking them down into multiple layers of narrative and participation. This in plain English means simply that it takes the narrative of a fiction film and intersperses this with that of a non fiction film. This is like taking a documentary and then adding say a scene that were performed like in The Thin Blue Line as an example. Well Medium Cool does the opposite and then the same. It takes a narrative, ficitional setting and interacts with real events that were underpinning the radical of a generation. By using new filming techniques and performance styles, the whole structure and expectation is thrown out and a new normal is formed. Inside of this is the use of reference and news journalism that informs the world and the viewer. Misleading and misdirecting but also comforting and controlling. Violence is captured as spectacle and this is then unimpeded. Murder as entertainment. 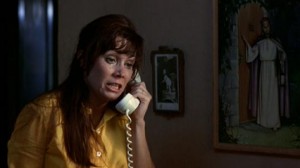 on the phone to Jesus...

Should you the ordinary film fan watch such a demanding and complex film? Yes most definitely.  It is a film that is highly rewarding and also highly challenging. Its use of varied styles is like a breath of fresh air in or controlled film times. The rejection of clean and obvious is marked by the desire to be of the moment and capture the event and its direct emotional effect. I never understood the critical complaints of style over substance. The whole is made up of the power of the picturised performance. The boys for instance are excellent as boys. They are natural and rightly so. They were pick off the street to play the role. This adds to the films authenticity. This is missed by critics.The thing never missed is Haskell Wexlers ingenious use of image. He is a cinematragpher of great talent and here he presses down on that stamp. The use of pre stedi cam shots, multi lenses builds and of course multi format vision is still very distinct. This is a must watch and one you will never regret.