The Defiant Ones Blu Ray Review

Racial separation wasn’t only contentious in the 1950’s. It was explosive. So forcing one white and one black prisoner together and having them flee for their lives, was bound to stir up a response. Even today it could create issues within either community. Now read with eyes of sexuality, cultural history and political theory, we miss some of the power inside the film. John Jackson (Tony Curtis) is a white petty criminal being transported to jail. Noah Cullen (Sidney Poitier) is a black petty criminal who is also on this journey. When the truck taking them slides off of the road, they find themselves free but chained together. Neither are happy about the prospect of going across an incredible hostile land.

The Defiant Ones might be Stanley Kramer’s film but it is really more than just a commentary on time. I feel it is a testament to the actors at the helm. Both are Adonis like creatures, seemingly moulded from sexual magnetism. Both are powerful presences in any film they star.  Both seem to hold the screen and captivate the viewer. In The Defiant Ones they uniquely control the scenes they are both in and also allow each other room to perform. This really comes into play when you have the two caught in situations of which they have no control. The scenes preceding the attempted lynching (which is also fascinating when it explores racial ideas and place of workers.) To be fair it is probably both actors playing it as a dual character piece and as such balancing their role. However it is a great thing to see. 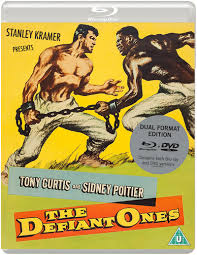 The upscale version jumps above the DVD version. It comes to stand up with some of the former releases. It might be the best film released by MOC! Kim Newman gives an interview on the film and the casts and director. However it is as useful as much of the written work on the film that lays around.

– 1080p presentation of the film on Blu-ray, with a progressive encode on the DVD

– Uncompressed LPCM audio (on the Blu-ray)

– Optional English subtitles for the deaf and hard-of-hearing