Flipping the kitchen sink upside down, GEORGY GIRL is a comedy about virginity and pregnancy (a bit like Jesus birth without the son of god). Georgina Parkin (Lynn Redgrave) is a 22-year-old woman, living in London. She teaches children, has a lust for life and is a virgin. Her family house is not the average. It has her father Ted (Bill Owen) and mother Doris (Clare Kelly) in residence but is the home of James Leamington (James Mason). He has a slightly unhealthy interest in Georgy. Her housmate Meredith (Charlotte Rampling) is a musician and has a great time. She is also pregnant by her Bank clerk partner Jos Jones (Alan Bates). Jos and Meredith get married. The only prtoblem is Jos is a little in love with Georgy as well…

I guess the easy way to describe the film would be to say that its a rom com by way of the Kitchen sink drama. Lynn Redgrave seems to be playing to the register of BILLY LIAR but with the vulnerablity of a woman thrust between two men. This is not as abstract or fanciful as that film, more its how Courtney plays it, is akin to Redgrave. Does the film work? Its funny and observes the dilemma’s of then and even now without being agressively one sided. Some of the films ideas are clever and executed with style, the early scenes in the school and the song at the party for instance. However it feels as if the steam runs out by the midway point. Though it can be said, the film gets the highs and lows of a woman who is not considered

The HD remaster of the film again is blind to me. I knew of a DVD version and a streaming version but have seen neither. Well I rather liked the London scape but felt that outside shots were balanced with light levels but inside or interior scenes felt darker or slightly off. However its only a minor thing. 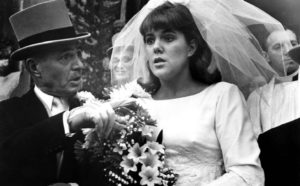 Kat Ellinger has covered a vast arrangement of releases over the the last 3 years. I suspect that in a history that will be written on the Blu Ray culture of our community, it will be her who is remembered with deep respect. Why? Well here it can be seen. Discussing class, roles, sexuality. All three things are spoken of by her with intellegence, thought and occasionally some level of sardonic irony. Again Indicator show an interview with a key player over the film. This time Charlotte Rampling gets the go ahead. What she has to say about working with Alan Bates. I find Rampling dull as a speaker however. Peter Nichols (the films screenwriter) is the best part of the set. Nichols talks with authority. Gets the film industry way with its product and people. My only gripe is that the camera shifts a little and it is filmed in a way that leaves a blur on screen…how odd