Charlie Bubbles (Albert Finney) famous writer and son of the North. His first wife and he divorced two years past, he has a son and his career is on the up and up. Success has allowed him to escape the world of his ancestors and also given him excess cash to run with. He has moved to London and spends time with Smokey Pickles (Colin Blakely), a friend and drinking compainon. He also spends time with Eliza (Liza Minneli), who is a employee for Charlie and seemingly does his PR and his support worker. As the weekend approaches Charlie is set to return home to visit his son. Eliza will come along, she wants to research her past. Chalie’s homecoming however might just prove more than a simply visit. Maybe it will outline to him, what he left and what it left in him. 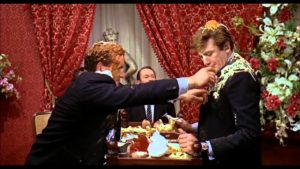 How much of CHARLIE BUBBLES is based on Finney’s life is speculation. What we do know is that Finney felt his performance was too heavy, too stifled by the dual role of director and star. Produced by a label set up by Finney and another actor, this film could of well been considered a ‘vanity project’. However it is far more a man searching for his soul. The idea of empty, plastic London, has often struck me. I was born here and I am well aware that my Australian mother nad Irish father came here for work. Finneys Charlie feels the same. 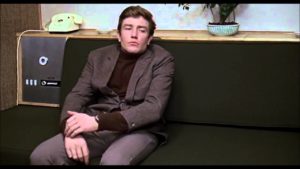 The vaneer of the place corrudes as he ascends the M1 to (as it states) THE NORTH. He is a local hero, a local done good. He never feels it. The most compelling way this is told is in master shots. Finneys Charlie is alone and we see he is vulnerable. Left out in the wilderness like an orphaned animal. He plays cynical and tough well. Here it actually works in his favour. The audio commentary digs into some of this but I think it is exceptional. Finney never directed again. Maybe this film took it all out of him. He told his story to the world. He narrated his pain and his realisation. I for one am glad he did. 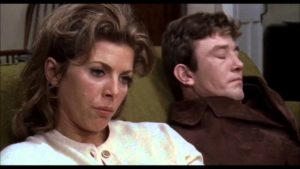 I have little to compair it to. The opening frames feel dirty and some detritous is visable but overall it looks a lot better than these stills show. This is visable in the dinner room scenes at the start, the match day scenes and the country home. A clarity is there and I did not note much in the way of grain, colour or light loss.

The commentary starts us off. Thirza Wakefield and Melanie Williams are both researchers but one is an acedemic the other a writer. I like Williams more than Wakefield. Williams looks at the surround of the period in the sense of British film. 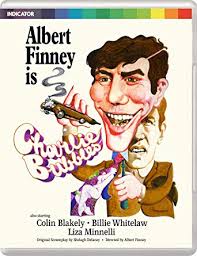 Wakefield seems sometimes to want to prove that she knows and a information dump comes into effect. Now this is more than likely a first time issue. The interviews are wholly hit. Timothy Garland gives us a kids eye view, which is really clean in its lack of reserve. He narrates a hotel scene and this is unguarded but funny. Acting as a job, hard life lived and of course exposure to famous people. Danny Leigh gets a lot of flack for some of his film books. However he is an engaging film commentator. Here he sets up Finney and his history. Really, really very good.