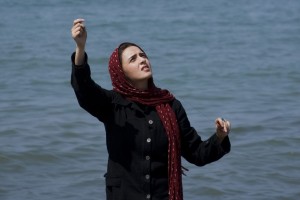 2011’s A Separation, went on to become one of the highest rated films of the year and was nominated for Best Foreign Language Film at the 2012 Oscars. This family melodrama put director, Asghar Farhadi’s name on the international circuit as one of the biggest and most important exports in the last decade. The Iranian director, has a lot to thank for in his picture because it has awakened interest in the rest of his cinematography throughout the world. To that end, Axiom Pictures released his 2009 picture, About Elly, which was described by film theorist and critic, David Bordwell as a masterpiece.

Starring Golshifteh Farahani, Taraneh Alidoosti and Shahab Hosseini (who also starred in A Separation alongside About Elly co-star, Peyman Moaadi), Farhadi has created a drama, so unique, which asks so many questions that it transposes cultures and language barriers, to become one of the most intense and interesting dramas of the past decade. Looking at the relationships in a group of middle class Iranian families who escape to the beach for a holiday, Farhadi has thrown together a simple premise, which relies on a trifecta of stunning cinematography, a tense script and thrilling performances from the entire cast.

The story concentrates on Sepideh (Farahani) who is the leader of this group of friends who are escaping to the coast of the Caspian Sea for a weekend getaway. Unknowingly to the rest of the friends, Sepideh has also invited Elly (Alidoosti), Sepideh daughter’s primary school teacher who remains unaware that there are other reasons she has been invited. The plan starts to come to fruition when Elly slowly starts to fall for recently-divorced Ahmed (Hosseini). The rest of the group remain somewhat suspicious of Elly, how quiet she is and how distant she remains until her relationship with Ahmed starts to show itself. Just when the group thinks it has found a balance, a horrifying incident threatens to ruin everything. Whilst Elly is left along to look after the children by the sea, one child is taken out by the tide but it is Elly that disappears (apparently in the waters). The reason for her disappearance remains unknown, was she drawn out in the water or did she leave to go back home to Tehran?

About Elly doesn’t waste any time questioning the group, whether it be it’s representation of women in society, how it deals with relationships or the differences 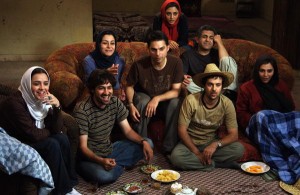 between generations in Iranian culture, we are left with an air of question marks to virtually every twist and turn. Although this engrossing drama does little to answer these ponderings, I found that I didn’t mind because instead the film sets out to do so much more than provide answers. Instead, About Elly, is a showcase in what a master director can do with few locations and a very simply storyline. Although the narrative of the film moves for the first act, when the incident occurs, we are suddenly caught in a stasis, which cannot move until we get some answers and yet the script manages to give us so much more. Where the film could have become boring and stale, it instead becomes much more internal; allowing each of the characters a chance to look in upon themselves and question what they did wrong in this situation. These questions become microcosms for the issues of society, and each character represents a different perspective. Much like a Haneke film, it’s in the stillness, that the greatest questions are asked.

What About Elly provides better than many dramas of this kind is a sense of the personal, we become intimate with the characters from the very beginning through the spareness of the space around them. The characters find themselves in a sort of hinterland, on the edge of civilisation where they are having to form their own rules and societal guidelines, and it is through this sense of a removal of the rest of the world that the characters bare themselves for inspection. The camera is very exploratory, less of the spaces around the characters and more of the interactions between the characters themselves. The looks they give each other tell the audience more than the speech spoken, the relationships and the hidden agendas are revealed through a careful plotting of facial expressions and subtle movements within this little world they have created. Farhadi’s direction has managed to make the Caspian Sea, for all it’s openness and connotations of a world over the other side of the water and instead created a sense of claustrophobia, which the characters cannot escape. Like Haneke, we see things happen within frames, we watch through doorways and under arches and we feel very much like the voyeur in this whole tragic incident; the audience therefore have very little input in what the characters end up doing. 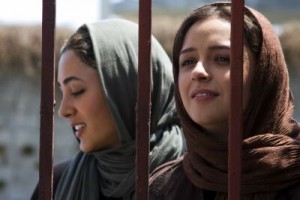 Whilst About Elly provides us with many moments of stillness and contemplation, it’s the end of the first act, which provides the audience with one of the most tense moments in recent cinematic history. The entire sequence when the child is taken out to sea, the rescue and the realisation of Elly’s disappearance makes for stunning cinema – in actual fact, Farhadi has created a sequence, which I believe is almost symbolic of the entire cinematic experience. I was involved in the characters lives for that moment, heart racing and wondering what was going to happen next. I was on the edge of my seat, because for the first and ultimately, only time, in the entire film, the camera is racing around, much like the characters trying to get involved by finding it difficult to fully immerse itself in their world. As an audience member, the cinema should make me feel, it should make me illicit a reaction and ultimately, I should believe – something this entire sequence managed to make me do.

As well as Haneke, About Elly also had strong connections (for me), with Hitchcock and mainly Psycho. In how many other films does the director ‘kill’ or make disappear it’s main character? With that character out of the way, a whole new story is created, mainly around their disappearance, but it causes more of a chance to get to know the other characters who are at once supporting and main characters. The tension usually seen in a Hitchcock picture, is easily transposed to About Elly, questioning at every corner the characters motives and creating new twists in the film.

I highly recommend About Elly as one of the most sensitive, provocative and unique dramas to have been released in the last decade. Featuring stand out performances from the entire cast, and highlighting this hugely talented director, I am looking forward to seeing more from Farhadi in the future.