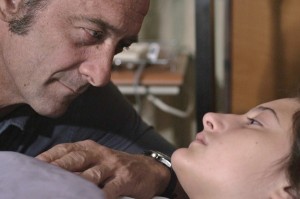 Claire Denis’ latest film, Bastards, is a glum nightmare both in terms of narrative and quality. Whilst this harshly named melodrama is tight on atmosphere, it seems to forget all the other rules around good filmmaking. On paper this seems like an interesting enough story; Marco (a dough faced Vincent Lindon) is called back to Paris after the suicide of his brother in law. His sister, Sandra has no one to turn to except her brother and has no where to hide. Her daughter has rapidly lost all control and ends up being hospitalised whilst the family business has gone south – but all this seems linked to the unlikeable and powerful businessman, Edouard Laporte (Michel Subor). When Marco moves into the same building as Laporte, his mistress, Raphaëlle (Chiara Mastroianni) and her son, he starts an affair with the mistress who seems to hate Laporte as much as everyone around him. But what Marco doesn’t count on is that Sandra isn’t telling the complete truth.

Denis’ does attempt to touch on a variety of themes, which are equally as intense and shattering as each other – especially when it comes to watching a wannabe hard hitting crime drama. Her look at sexuality and sexual abuse is probably the most provocative in the film, whilst the rest of the story seem a little weak and uninvolving. She tries to explore the nature of men and women – hence the title, and their interactions over a small space of time. Relationships is what Bastards really boils down to and unfortunately there isn’t one relationship in the whole film, which seems innocent or healthy, except between Marco and his niece but as she has no dialogue it makes it extremely hard for the audience to access anything they would possibly sympathise with.

What Bastards does have is intensity and a punch; it’s dark colouring and exploratory camera is successful in creating both a sense of tension and alienation from

the characters. But unfortunately this isn’t enough when poor pacing and a diluted structure make the film anything but interesting to watch. What Denis has actually done by creating such a tough atmosphere is created a cold film, which at the end, gives the audience little to explore or think upon. The way in which the affair between Marco and Raphaëlle is mirrored with the unforgiving sexual abuse of Justine (Sandra’s daughter), makes the film uncomfortable and messy. It seems as if two very different films are at play here, both that could have different circumstances and yet when the end does finally arrive, it seems quick and careless. Whilst it seems that a plan had been in place throughout the whole film to bring the audience to a subtle end, it doesn’t seem to really conclude the story but simply stop itself in its course.

The only acting in the film, which is at all touching (especially considering how hateful all the characters really are) is from Mastroianni who plays Raphaëlle with a sense of innocence that only someone in the wrong could do. She sweeps gently across the screen but even that couldn’t stop the clumsy and poorly choreographed chemistry between Raphaëlle and Marco. Lindon doesn’t appear to have a grasp on his character, but then again nor does the audience, so why expect him to?

Bastards is a film which starts with little hope and ends with even less (how it quite manages that is beyond comprehension), it’s a poorly thought out film that does little to add to the canon. Whilst Denis’ filmmaking cries out to be included in the traditional neo-noir world, her story and it’s interpretation are pure melodrama and boring at that.