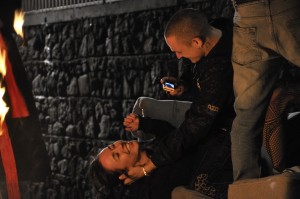 Dollhouse cleverly defies all expectation by turning out to be like nothing that has come before it. Directed by Kirsten Sheridan and starring a cast of virtually unknowns, Dollhouse follows a group of teenagers as they break into an empty beautiful big house and decide to party all night long. On the tin, it doesn’t sound particularly original or innovative, but Sheridan’s filmmaking is such that she transports the audience into a world filled with such wonderful colours, sounds and images – something so rarely found in contemporary teen dramas. Furthermore, the entire cast bring some really quite special and pronounced to their characters and to the film, subtly touching on the nuances of the secrecy and drama of the film.

The film starts with a bang, instantly engaging directly with the characters as they break into a beautifully decorated house in suburbia. Straight away they turn the music to top volume, mess the living room up and explore what food and drink is in the house. One of the group, Jeannie (Seana Kerslake) disappears upstairs to wander around.

Within the first ten minutes of the film, ‘Hall of the Mountain King’ is blared out of the speakers, accompanied by a manic montage of the teens discovering the house. One of the group dances haphazardly and as chaos explodes around him. Sheridan really creates a world in which it is so difficult for the audience to turn away from the screen because there are no rules in the characters world and therefore anything could happen. 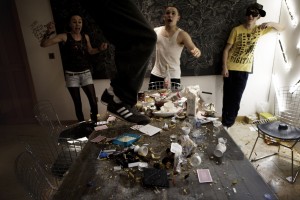 group question why they ended up with her in this house. She tells them that she wants to have a party and they are all invited. Kerslake’s performance as Jeannie is nothing short of beautiful and gripping; there is something almost Cassie from Skins like about her as she flows from one room to another. Nothing appears to stress her out and whilst the house around her is being destroyed, she seems to be enjoying herself more and more.

It is quickly established that there is more than meets the eye with all the characters in the film, they all have their secrets and whilst the film is wonderful in setting up this sense of mystery, it doesn’t poke too far into their lives to discover everything that is going on. This almost doesn’t seem all that important in the film because Dollhouse is instead really rather reminiscent of the punk era, where anarchy reigned and rules were thrown out the window. Each of the teens in the film play mind games with everyone else and whilst the films want to get under the skin of the characters, it also careful to not make that the most important thing.

When Robbie turns up (What Richard Did star Jack Reynor), the story changes again. Initially there is a joke set up with Robbie as the boy next door. He is dressed well and speaks well – better than those who have broken into the house. Whilst the rest of the group are dubious about Jeannie, they decide to not look any further into why they ended up in her house. Yet Robbie demands to know where she has been for the past year; it seems they previously had some sort of relationship or friendship and she disappeared without a trace. The group doesn’t take well to Robbie initially, spewing insults and threats of violence his way. Yet Robbie seems much more interested in working out where Jeannie left to go. 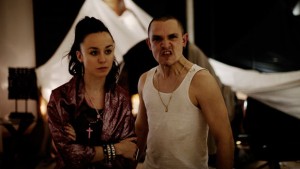 The film continues and the party starts up again but various themes are introduced. Fears are played off greatly in Dollhouse, leaving all the characters somewhat broken at different parts of the film because their worst fears have either been discovered or played upon. Furthermore sexual domination and negotiation are introduced. Despite not being the only female in the group, it seems that Denise (Kate Brennan) is the girl with the sexual responsibility to the group. She is in control of her sexuality and yet widely plays with it when she thinks it will get her somewhere. In one of the beautifully shot scenes of the film she has sex with Robbie in the bathroom but her intentions behind this and the consequences are left unknown to the audience. This sense of mystery almost brings the audience further into the house where the rules don’t seem to apply.

The last section of the film is one of the most gripping and tantalizing finales in recent cinema, really allowing the characters to spiral out of control. After 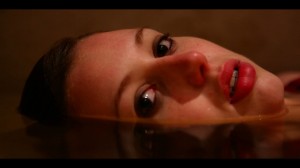 the group decides to turn Jeannie’s room literally upside down (nailing everything to the ceiling), the remainder of the film takes on an acid trip feel, illuminating the sickness of the characters and the come down they are about to feel. The shocking finale is stunningly filmed and really does open up Dollhouse for further thought.

Unique and innovative, Dollhouse is a miraculously filmed acid fuelled house party. There are huge chunks of the film that feel so wonderfully surrealistic and both the camera work and music aid this sense of DIY filmmaking. In parts hugely transgressive and yet naturalistic at the same time, this is something that teen drama has rarely done before, renewing the genre and exploring an intrinsic darkness that does exist in us all.