Sundance London: Emanuel and the Truth About Fishes
Home
Reviews

Sundance London: Emanuel and the Truth About Fishes 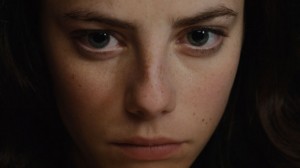 I walked into Emanuel and the Truth About Fishes quite unaware about what I was going to watch; all I knew was that it starred one of the most intriguing casts I had seen this year. From Kaya “Skins” Scodelario to Frances “Bedazzled” O’Connor, and stopping along the way with Jessica “Blade: Trinity” Biel. Well, I can tell you straight off, this was one of the most powerful, provocative and emotionally dazzling films I have seen in ages.

Emanuel is a succinct and in depth exploration of the relationships between mothers and daughters and what can happen when those formative relationships are simply in our imaginations.

Emanuel quite quickly sets up the family unit between Scodelario’s Emanuel, O’Connor as her step-mother Janice and Alfred Molina as her father Dennis. You know from the very start that there is something not quite right within this family and much of their trauma remains unspoken. It is in what isn’t said that their most in depth and heart felt revelations occur. As the film starts, we learn that Emanuel’s mother died in childbirth (we learn this very quickly as Emanuel stares into the mirror in the first scene and proclaims that she is a murderer). Janice only recently came into this family and really tries hard at forging a relationship with her step daughter because she has no children of her own and we find out that she cannot have children of her own. She is the ideal woman of the house, or at least she tries to portray that ideal stereotype; she cooks perfect meals for her family and looks after the home but she cannot crack below the surface of Emanuel. Emanuel and the Truth About Fishes is straight away setting itself up as a film looking at different types of mothers and different types of women.

The films takes place in the lead up to Emanuel’s 18th birthday, and for the first part of the film we are taken on a very insular journey where Emanuel leads her daily routine without anything special going on. She works at a local pharmacy, flirts with one of the boys on her daily train and talks back to her parents. You get the impression this is going to be a teenage angst film, where she has never gotten over the death of her mother and she cannot bring herself to get close to the woman who has come into her household and she feels is trying to replace her mother.

We have seen Scodelario do moody teen before, in fact for years she played Effy on Skins, who seemed to wreck havoc wherever she went. Alas, this is not another Skins, Emanuel is clever but cutting. Scodelario clearly cements herself in her performance as one of those stars to watch out for. She has amazing chemistry with everyone screen and moves in a way, which makes her integrally part of the scene; something would be missing if she weren’t there.

As the film goes on, the family gain a new next door neighbour, Linda played by the absolutely beautiful Jessica Biel. She seems hippy like in the way she looks with long sun dresses and alternative head wear. Her house is immaculate and decorated as if she measured up weeks before moving in for the perfect furniture. She speaks properly and seems massively together; but this is one of the main themes of Emanuel; you can always seem tough and strong on the surface but once you look below there are always cracks and you are always drowning.

This exploration has been done a million times before and looking below the surface isn’t new, but director, Francesca Gregorini has created a picture perfect world which is so intense and shattering, that the depths of her female characters go somewhere that very few films dare to touch. Linda doesn’t come alone, but also with a baby, Chloe who Emanuel offers to babysit.

Here starts the third and most dramatic act of the film; I don’t wish to go too far into what happens because it is much more affective and beautiful on screen than if you read my words but what does happen is that the cracks fully reveal themselves. Emanuel starts to rely on Linda and vice versa; whilst they initially look like they need each other for different things, when you survey their own damage they are actually looking for the same thing; stability, relationships, a human touch.

The tone of Emanuel and the Truth About Fishes is unrelenting throughout and once it catches your attention, it is wary to ever let it go. You go through the sincere madness of the characters with them and after a while you start to believe their fragile reality with all the turmoil and damage included. Gregorini has created a brilliant mirror for her female characters and has created such strong characters that they absolutely involve the audience throughout the whole film. There is a lot of close ups throughout and this creates a wonderful sense of intimacy, where the audience can really start to believe what they are watching and empathise, especially Emanuel and Linda. It seems that we get so close that in reality it would be uncomfortable to be that close to someone unless you really knew them, so (mind the pun), Gregorini is throwing us in the deep end and forcing us to endure relationships with the characters from the very start.

The music mixed together with the image is haunting and really leaves you thinking about it for a long time after you have watched the film. It confronts

something so clearly about the human condition and if you take away the very specific storyline and circumstances of the film, it ultimately is a look at humanity itself, for all its woes and worries and makes us think about our relationships with those around us. The film also questions the idea of realities and our mental states but it does this better than most in recent film because it is never judgemental and simply lays out the facts for the audience who can find it emotional or shocking or wrong.

Sure, there are some plot holes in the film and you do have to suspend your disbelief to allow yourself to submerge (pun again) in the allegories and meanings of the film. There are points when Emanuel is completely suspended under water and in one of the most incredible sequences, is swimming along with the baby. She is discovering a new world and finds herself falling deeper and deeper until she finds her mum and realises what she has to do to help Linda. Their relationship is all involving on screen and although some may see slight lesbian connotations (they are referenced and usually funnily, in the film), it is so much more. It is more than mothers and daughters and more than women’s relationships with each other, but they are ultimately a microcosm for strong human connection, which is ultimately what any of us yearn for.

Forging realities and giving us some of the most powerful and raw performances of the year, especially Scodelario and Biel who gives the best performances of their careers, Emanuel and the Truth About Fishes is one of those films, which will stay with you. It will get your heart beating and make you want to fall in love all over again.