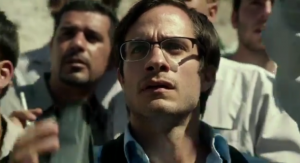 Rosewater, Jon Stewart’s directorial debut, is a gripping, fast paced and important true life drama about the 118 days that journalist, Maziar Bahari, was detained and interrogated in Iran. Based upon Bahari’s memoir, Then They Came For Me, the film follows Bahari (portrayed delicately by the incredible Gael Garcia Bernal) leaving his pregnant fiancé at home in London to return to Iran to cover the 2009 presidential election.

The film follows Maziar as he finds mass support throughout all kinds of people in Iran for the reformist candidate, Mir-Hossein Mousavi who was against then current President, Mahmoud Ahmadinejad. There is a sense of optimism and hope for change in the country and the whole world is watching what will go down in Iran. Bahari splits his time between his mother and interviewing people who are supporting Mousavi. He Skypes his fiancé at home and she warns him to be careful. Time spent with other journalists is often lighthearted but always with an undercurrent that something important is going to happen. He spends the day of the election filming the inside of the halls and buildings where voting is taking place until he finds that he is disallowed from entering by some guards. It is quickly announced that Ahmadinejad had won and riots and demonstrations began to grip the streets as many cried out about election fraud.

Violence erupts across the country and Maziar is in a keen spot to cover the events. He also gives an interview with Jason Jones of The Daily Show (Stewart’s own satirical news show), which questions whether he is a terrorist. But one morning, the government decide to make a point of Maziar after he captures footage of violent retaliation from the government against the people. They collect him from his home, blindfold him and take him to Evin Prison where he is brutally treated, interrogated and questioned. They want to know about his relationships in the UK and USA, they suspect he is a spy working for foreign intelligence. They ask why he left his fiancé in London, has he been sleeping with other women? They go through his belongings; magazines, films, music and they suspect he has smuggled pornography into the country. What they are trying to do is shatter his name and reputation. 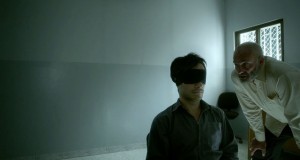 the Ayatollah Khomeini regime. Stewart’s carefully placed use of flashbacks and almost dreamlike sequences help to strengthen the story and create a bubbling force of intensity throughout the film. As the audience learn more about the history of Iran through a microcosm such as the Bahari family, they become more equipped to understand what is being shown to them. Stewart’s direction proves he has a keen eye for both the serious and the funny, carefully balancing warmer moments of the story with the starkness of the setting and the violence going on around the characters. He shines a light on an event in recent history, which deserves very much to be told to people around the world. Rosewater is both a story of a country in turmoil but also a man who believes, who risks and who knows that justice will be brought.

Bernal’s performance as Bahari captures the audience from the very first shot. The film begins on the day of his arrest, being gently woken by his mother and told men are here to collect him. He quickly understands what is going on and believes it must be a mistake; Bernal tells us all this with his movements and his eyes stare deep into the audience.

Rosewater is a gem of a film, dipping into recent history to create film that will interest all kinds of viewers. Stewart has proven he is a force to be reckoned with.