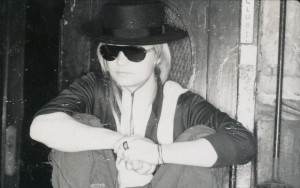 Author The JT Leroy Story is the most gripping and fascinating documentary of the year – unravelling at such a pace that even the casual documentary viewer should give this film a spin, Jeff Feuerzeig’s film is an exploration on the literary myth that is JT Leroy and Laura Albert, the American woman behind JT’s creation.

For those unaware of the story of this gender-fluid author, whose books became quite the storm in the 90’s (including a film adaptation by Asia Argento), they were billed as fiction based in a lot of truth. Each book aimed to illuminate a part of this mysterious author’s life (from the prostitute mother, to dealing with drugs) and with the author doing no interviews or public appearances, it only fed the wave of enthusiasm for this writing. Bearing in mind, this was a world before social media and the internet in every home – this was a story that spread across the world by good old fashioned word of mouth.

But JT Leroy did end up coming out into the public when the hysteria for the author was reaching a peak level (including a very interesting visit for Cannes Film Festival for the premiere of The Heart Is Deceitful Above All Things) and supported by an entourage including a very questionable British manager. Celebrity friends started to crop up here, there and everywhere including Courtney Love, Smashing Pumpkins Billy Corgan, U2’s Bono, Shirley Manson and Winona Ryder. Then in 2005, it all changed when a newspaper threatened to end JT’s story.

JT Leroy didn’t exist, he was never a real person but instead the literary creation of Laura Albert, who narrates this 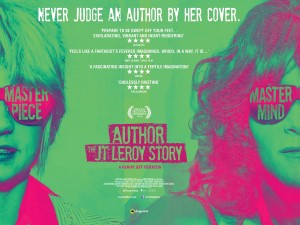 film with urgency and passion, telling the story how she wanted to tell it from the very first day. Feuerzeig understands the power of Albert, she is after all an incredible storyteller and he let’s her take the reins of where she wants to take the audience. From her early days as an abused child after her parents divorced, living through her younger sister on the punk scene when she was too worried about going outside for fear of being too fat, chatting with a psychiatrist on the phone and soon coming up with Terminator who morphed into JT after she starting writing the tales of JT’s life.

Author The JT Leroy Story is a hell of a story, which is supported by Laura’s need to explain things to the audience alongside tape recordings of all conversation that JT had (why these we recorded, Laura never explains but perhaps she knew one day there would be a reveal and a need to tell her side of the story). It’s an insight into one of the great literary minds of the last 30 years; something that an audience rarely get the chance to take advantage of and a journey into the great depths of writing and storytelling.

Constantly surprising, exhilarating and exciting, Author The JT Leroy Story, is a film like no other – it needs to be admired and watched over and over again.