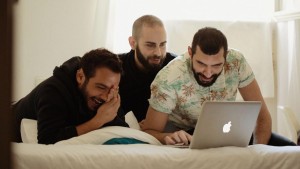 Jake Witzenfeld’s Oriented is one of the most unique and interesting documentaries you will see all year, it’s an urgent film, filled with passion and love from all those involved. Quite frankly, there is very little like it. Oriented follows a group of LGBT Palestinians who live in Israel, during the Israeli-Gaza conflict of 2014 and not only does it consider their sexual identity, but it looks at this through the glass of a national identity.

This is about a group of young men and women who feel freer and more comfortable within Israel to be out and proud about their sexuality and yet, they continue to live in potential danger due to their own Arabic heritage. They are at a crossroads between not forgetting where their families have come from and wanting to represent them in a modern day Israel but also knowing that if they were to go back to their homes, they wouldn’t be able to live openly as gay men and women.

Oriented follows the lives of three gay friends in particular, each of whom come from slightly different backgrounds and points of view. Khader’s family know about his sexuality and whilst they may accept it they don’t ever talk about it – he lives in Tel Aviv with his Jewish boyfriend, David. Fadi is a Palestinian nationalist who is perhaps the most vocal of the group, he could never imagine falling for a Jewish man until it happens. Lastly, Naim decides that now is the right time to tell his family about his own sexuality and he knows whatever happens, he will have his friends to help guide him.

These stories are told with the backdrop of a growing war in the Middle East and all these guys are looking for is a way to help start a change, starting with their families and outreaching potentially to a wider national scale. 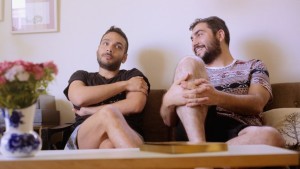 Unfolding in a way that allows the audience into these stories and makes them complicit with those we are following, Witzenfeld’s film is intimate and really pulls the audience in from the very start. He doesn’t assume that the audience knows all the politics of the situation but through the group, illustrates some of the issues going on in their lives. The pacing of the film is paramount and is one of the reasons that Oriented should be a vital watch for so many groups of people around the world interested in anything from LGBT rights, to national identity, to stories that begin to show the bigger picture of the current situation in the Middle East.

This is a group of people who are active within their community, they have created social media campaigns and videos to tell people around the world their point of view and to be let in, in the way that Oriented lets us is very special indeed. Hugely recommended as it is bound to start interesting, international discussions about society in a way that is bigger than the film itself, Oriented is a worthy contender for one of the best documentaries of the year.