The Place Beyond The Pines Review
Home
Reviews

The Place Beyond The Pines Review 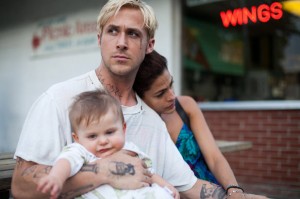 The Place Beyond The Pines sees Ryan Gosling reunite with Blue Valentine director, Derek Cianfrance, in a film, which is unlike anything else I have seen this year (or for a few years). This is an intense film, filled with many surprises and twists, and I have been astounded how none of the advertising or writing on the film thus far has given away anything. I do not intend to go through the in’s and out’s of the story as I sometimes do because I wouldn’t want to distract from a viewing of the film but instead I intend to wax lyrical about the masterpiece of filmmaking, which is The Place Beyond The Pines.

Briefly, I want to plot the story out for you without giving too much away. A professional motorcyclist, Luke Glanton (Ryan Gosling) finds himself reunited with a woman he previously slept with, the beautiful and mysterious, Romina (Eva Mendes). Luke is a silent type, a traveller, never leaving anything behind because he hasn’t any connections to leave in the first place but when he finds himself with Romina again, he lets his guard down and all his emotions come rushing back. When Romina reveals they have a baby together, Jason, Luke decides to leave the travellers and stick around to help bring up his son. In one of the most emotionally heart wrenching and beautiful sequences, the family come closer together into a traditional unit, which you know the film is going to break up. In an attempt to make money for his baby and the mother, Luke joins Robin (Ben Mendelsohn), an auto shop owner and together they decide to rob banks. When a robbery goes wrong one day, we are introduced to Avery Cross (Bradley Cooper), a police officer hot on Luke’s tracks.

During the second part of the film we are introduced to the intense and prolific police corruption in Schenectady, New York (the Mohawk translation is the 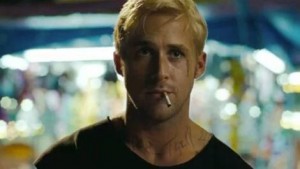 place beyond the pines). Avery knows that something is wrong but has little control over the situation and instead finds himself, accidentally, in the centre of the scandal, which threatens to blow everything up. This leads into the last part of the film, which takes place a while after the first, concentrating primarily on Luke’s son, Jason and Avery’s son, AJ and their interactions together, which lead to one of the most heartbreaking, tender and stunning conclusions in recent cinematic history.

Much of the hype has surrounded Ryan Gosling, who has quickly become one of the biggest and most talented stars in Hollywood. Pines is the first of two pictures this year, where he will be reunited with a director he has previously worked with, the second being Only God Forgives with Drive director, Nicolas Winding Refn. In my mind, there must be something about Gosling, which makes directors want to work with him again. Not only can it be his success in making sure that a film does well, but there is a multitude of things, which assert Gosling as an emblem of Hollywood. In the first instance, he can actually act and he can act bloody well. Every time he appears on screen as Luke, he captures the attention of the audience, with his every move and word. Sometimes the silences mean more than anything, and Gosling’s face can portray more emotion than most actors can do in huge monologues. The nuances of his movements are always extremely provocative, and he never does anything hyperbolic or unneeded but instead portrays fully formed characters, who are carefully put together through lots of smaller elements. Luke, for instance, is loving to his family and wants to be there for them but he also has an extremely dark and violent side, which comes out during the times when he is robbing the banks or when he fights with Kofi, Romina’s boyfriend. Through his silences, the anger builds up until it explodes on screen, and everything he does causes the audience to feel strong emotion. The other part of Gosling’s star persona is that women want him and every man wants to be him (or possibly wants him as well), and this adds to every character he plays. 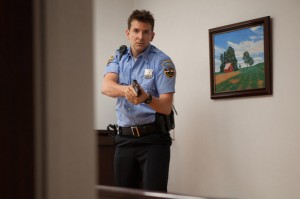 It would only make sense to next consider, Bradley Cooper, who plays Avery Cross, in the best role I have ever seen Cooper portray. Pines sets the characters up so that Avery is the opposite to Luke in every way possible, but on thinking about it closely, the two characters had more in common than meets the eye. Cooper, who is still currently riding off the success of the awards season and Silver Linings Playbook, has finally found a role, in my opinion, which really shows off his true potential as an actor. This role is unlike anything I have seen him in before, and unlike Gosling whose character is sometimes similar to The Driver of Drive, Avery stands apart from anything else. For the first time, Cooper managed to provoke some genuine emotions in me, and both his acting and storyline were extremely delicate and provocative. Specifically the paths his character took as the film progressed made Avery’s journey one of the most interesting in the film. From his explosive introduction, his brief time with Luke all the way to his emotional turmoil and issues with his family throughout the middle part of the film and until the end where he tries to overcome the police corruption, but instead joins the ranks and runs for Attorney General. He is raw and unstable, portraying a man who finds those around him with fewer morals than he realised. He deeply and intellectually changes throughout the film, more so than any other character, and this is what makes him so powerful.

As for the rest of the casting in Pines, Eva Mendes plays Romina, the mother of Luke’s child. During her time in the film, she finds herself caught between 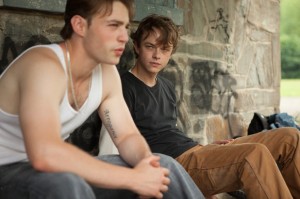 the men in her life, all of whom she loves but they find it difficult to give it back. She is sensual and stunning on screen, but I wouldn’t expect anything different and her on screen chemistry with Gosling is electrifying, sexual and tantalising. The rest of the cast are also brilliant, including Ray Liotta as Deluca, who although is only a small part of the story and has very little screen time, is haunting and mysterious. He manage to intimidate everyone around him and because of what he does, it reverberates for the rest of the story. The two younger actors who play Jason and AJ as teenagers are stars to look out for. Emory Cohen plays AJ, Avery and Jennifer’s (Rose Byrne) son, who is bulked up and knows how to control those around him. He plays the game and understands the street, almost like Luke, whose son Jason (played by Dane DeHaan) only has the weaker and more insular characteristics of his father. I feel the connection between AJ and Luke is interesting to point out, as they are closer to father and son and yet they never met but are inextricably connected through Avery. The power play between AJ and Jason is incredible to watch, and they manage to balance the darkness of being a teenager with a sinister homoeroticism, which truly electrifies the screen. 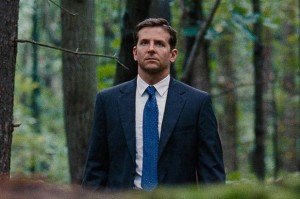 So much of Pines is so purposefully shot that I wouldn’t want to go into too much detail about what it looks like. Truth be told, on the big cinema screen it is one of the most dazzling pictures I have ever seen, with Cianfrance taking true care about his locations and taking full advantage of every corner of the image. I do want to briefly talk about one sequence, during which Avery is chasing Luke through the streets. The police chase has been done so many times before, but (and this is a pretty big statement), never as well as Pines. The audience find themselves inside Avery’s police car, feeling and seeing all the bumps in the road, as you would if you were driving at that speed. I felt like I wanted Luke to get away and save himself, and although the film pairs you with the police car, you want Luke to get out of the way and out the scene, into safety. Every twist and turn is sickening and it felt more like a fun park ride, because of the sheer speed at which we find ourselves moving. Each time Luke stalls or crashes is another metaphorical punch to the chest and I found myself so far off the edge of my seat I was almost on the floor (no hyperbole intended).

At this point I feel I should wind up this review, but I truly do have so much more to say about this film and perhaps will revisit its brilliance at another point.

The Place Beyond The Pines is one of the most beautifully filmed, timeless epic crime dramas, which says so much on so many level different 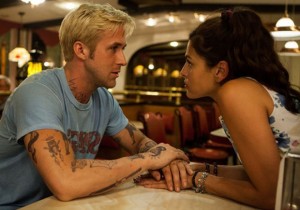 levels. Cianfrance’s filmmaking goes from strength to strength, and Pines feels like a classical Hollywood piece of cinema, where everything on the screen is there for a reason and he has made very deliberate decisions about how things are filmed. The casting is perfect, and together they portray one of the most provocative and emotionally intense set of characters that I have seen on screen in so long. The story is exciting, and the screenplay is so delicately and precisely written, that the audience find themselves on a thrilling journey before they realise it and I hope to jump back on to watch again, really soon.