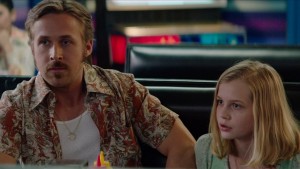 Who’d have thunk it? The award for best chemistry of the year goes to Ryan Gosling and Russell Crowe for their hilarious pairing in Shane Black’s The Nice Guys. Even as the film is starting, it has sequel and franchise written all over it (in a good way, and by the end of the film, a very good way).

As well as Healy and March, there is a third member of their little investigative unit; Holland’s young teen daughter Holly (played by Angourie Rice, who just shines on screen with a fantastic presence) who has charisma for days and gives as good as she gets.

What The Nice Guys does so well is refer back to the old school buddy cop comedies; one would be klutzy and the 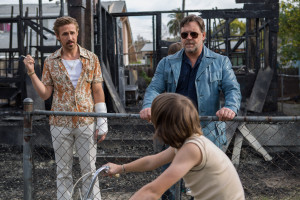 other is the know all, they’d stumble into situations that would further their investigation but immediately seem dangerous to the characters and their initial friction with one another would be ironed out by the end as well as any misunderstandings or miscommunications. But where The Nice Guys does well to differentiate itself is through the outstanding performances (especially from Crowe and Gosling, who are given plenty of space to show off their rarely used comedic bones), the twists and turns of the story that actually have roots in political satire (with a fantastic support from Kim Basinger as the head of law enforcement and Matt Bomer as the violent villain ready to pounce) and the fact that the film reeks with style and fun (the costumes, the soundtrack and the locations are so evocative and really create a whole package). 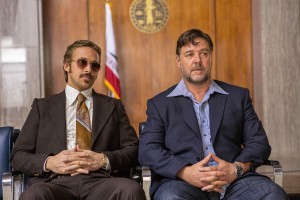 In the last decade, hybridity amongst genres has grown tenfold but the comedy mystery has certainly seen some missteps in recent years, although The Nice Guys ranks with this year’s best comedy mystery, Zootopia. The lines certainly blur as the film goes on and the audience are pulled into the well written and paced story, but can’t help but adore the moments of great physical comedy.

The Nice Guys is a kick ass film, with a killer cast and a great story to boot – let’s just hope it’s the start of a fantastic relationship between these two characters for years to come.