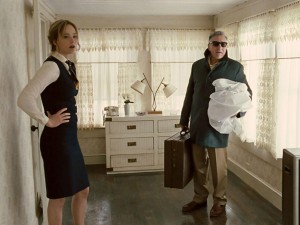 David O. Russell continues his on screen affair with Jennifer Lawrence and Bradley Cooper in their third film together – Joy, based on the story of Joy Mangano, an American businesswoman who created the miracle mop and sold them live on QVC. Ultimately this film belongs to J-Law, who now leaves behind the mockingjay and steps fully into the shoes of another kickass woman a la Erin Brockovich. It wouldn’t be so farfetched that had this film been made a decade or two ago, it would have been Julia Roberts or Meryl Streep in the central role but my, doesn’t Lawrence shine in this powerful and emotional role – a real powerhouse performance.

Joy follows Mangano as a divorced mother of two, her parents (Terry played by Virginia Madsen and Rudy played by Robert De Niro) split when she was younger but they never stopped sparring, her ex-husband Tony (Édgar Ramirez) lives in the basement and her saving grace is her grandmother, Mimi (with a delicate and subtle performance from Diane Ladd). One of the jobs she does is working for her father at his auto-shop doing his books, where her older half-sister Peggy (Elisabeth Röhm) also works. It becomes clear through a flashback that Joy was always destined for great things – she was always creating and inventing but life got in the way and stopped her dreams in their tracks. One of the strengths of the film is that this is such a universal story and something many of the audience will be able to relate to and sympathise with.

Rudy starts dating a wealthy widow, Trudy (Isabella Rossellini) and during a family trip on a boat Joy gets an idea that ultimately 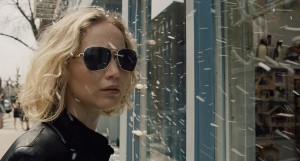 changes her entire world just as everything seems to be falling apart (quite literally her house is falling apart). As a house owner and mother, she realises the need for a mop that is more practical and jumps head first into the idea that will become her miracle mop. Joy isn’t interested in finding another man or relying on other people around her, but instead wants to her use talent and expertise to create something that will prove her worth. She borrows some money from her father and Trudy, hires in local women to help her and creates a batch but is unable to shift a single unit when she realises that local shops buy at major discounts from the huge corps. An outstanding sequence where Joy and her friend, Jackie (Dacha Polanco) try to sell the mops in the car park of a supermarket is both equally funny and sad.

But soon she meets Neil Walker (a very charming Bradley Cooper), an executive at the newly inaugurated QVC who is willing to give the mop a go on air. He wows her and bewitches her into thinking that this could change her life – all he requires is that she creates a massive number units ready for when they on sale. She does, they go on sale and they flop on air because the presenter they chose had no idea how to use it. But she still won’t take this lying down, storms into the QVC office and this, she realises, is the conversation that will change her entire life – nothing before it mattered. 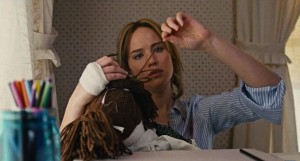 Everyone loves a happy ending and the rags to riches tale isn’t a new idea but this ensemble of players just manages to tell the story with such passion, love and excitement that Joy pops from the screen. The power of Lawrence’s performance can be summed up in the intensity of her voice and posture when she is telling her father and sister not to talk on her behalf – her body stays perfectly still and her voice remains calm with the volume low, but she stares crushingly into the eyes of the audience and makes her position known clearly. The performances are dynamic, energetic and mighty, which all help push on the narrative thrust. O. Russell’s direction is steady and solid; his pacing his even and full of life and the audience can’t help but be pulled in. Plus his screenplay is also just right – ranging from dramatic to hilarious, sadness to enthusiastic, it really takes the audience on a rollercoaster of emotions.

Joy is a great way to start your year in the cinema – it’s fabulous, freeing and fun with the best performance from Jennifer Lawrence yet.