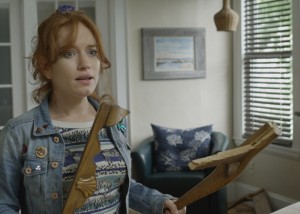 Kyle Rankin’s Night Of The Living Deb is a breath of fresh air amongst the creeps and the ghouls of the horror genre. Unlike most other genres, horror really spans, it is so far reaching and does it’s own interpretations on a multitude of other genres (as Deb does with comedy) as well as playing host to a whole range of stories within it (found footage, psychological, monster etc) and Rankin clearly understands this and has decided that he wanted to make the audience have a laugh.

The hilarious Maria Thayer stars as the titular Deb, a woman who has a lot to say and few people to say it to. She is a woman on the prowl and when she spots a rather pretty guy (Michael Cassidy) over by the bar, her friend Ruby (Julie Brister) persuades her to go and say hey. The next thing Deb knows, she has woken up in Ryan’s (Cassidy) apartment and he is pacing around the phone in his living room trying to figure out how to get rid of her. Quickly she has flashbacks to meeting Ryan’s fiancé, witnessing their argument and then having a drink. He returns to explain that as it’s 4th July, he is going to spend the day with his family and she should… you know… go. It’s hysterically awkward, making the audience cringe with delight. But what really gets you though the scene is Thayer’s staying power, comedic timing and how everything she is thinking is plastered all over her face. They leave the apartment and go in separate directions but what neither expects to encounter is a zombie apocalypse, because you aren’t really ever ready for that.

From this point on, the misguided pair are thrown together to try and figure out what went wrong and where their loved ones are. Deb wants to get to Virginia to see her mother and Ryan wants to get to his family on the other side of town (which includes brother, Chaz (Chris Marquette) and dad, Frank (played by the ultimate mysterious cult father figure, Ray Wise)). They decide that they must stick together if they aren’t going to get eaten alive and through a series of incidents they burn a old zombie lady, mow down a tonne of zombies in Deb’s car, have to run down fire escapes and climb atop of zombie shoulders. But none of this prepares Deb or Ryan for something neither realised they wanted – each other.

In a genre where spoof is prevalent, Night of the Living Deb hits all the right notes in its comedy. But what really makes the film work is the brilliant 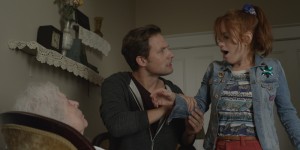 dynamic between Deb and Ryan, who really are the core characters of the film. The chemistry between Thayer and Cassidy is akin to some of the funniest comedy duos in recent history – think Efron and Rogan in Bad Neighbours or Tatum and Hill in Jump Street – they bounce off of each other, clearly enjoying each others company and have fallen into a rhythm that makes for good comedic timing. Together with their great performances is a fantastic script, which has clearly been written with care but also doesn’t have an issue in trying to find the balance between story and silliness. The effects of Night Of The Living Deb are also noteworthy because although the film was made on a small budget, those moments when heads are blown off or blood flies are done with such technical skill that they look real and these moment jolt the audience – reminding them of the horror aspects.

Night Of The Living Deb is a riot, with a story that is fun and certainly rivals other spoof horror like Shaun of the Dead. It’s memorable and a great one to watch with a group of friends, on a date or frankly all alone…