Sleeping With Other People DVD Review 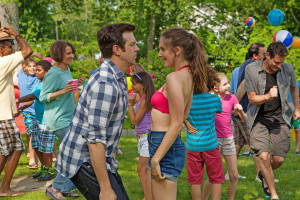 Leslye Headland’s Sleeping With Other People features one of the best and most memorable romantic comedy (with a twist) casts of recent years; lead by the insanely talented duo of Alison Brie and Jason Sudeikis with supporting backup from Adam Brody, Billy Eichner, Amanda Peet, Adam Scott and Natasha Lyonne (to name a few), this film surely has its bases covered across witty, intelligent humour and school boy Hangover type antics. That really is the long and the short of it – it’s refreshing to see a film that bends the rom-com conventions until the final payoff.

The film starts off with Lainey (Brie) and Jake (Sudeikis) meeting at college as she tries to pummel down the door of his neighbour, Matthew Sobvechik for sex. Jake thinks Matthew is the most boring guy in the world and persuades Lainey to come and hang out with him – otherwise she was going to get kicked out of the building. They spend the night flirting, laughing and eventually losing their virginity to one another. Flash forward a number of years – Lainey and Jake are no longer in contact but she is having an affair with Matthew (Scott), who is married and his wife is pregnant. She has also been in a relationship with Sam (Brody), which she ends when she realises it really isn’t who she wants.

Jake has spent his life dating women and then finding sleazy ways to end the relationship because he cannot find it within himself to commit. Rather than just telling her, he would sleep with someone else and then just tell his girlfriend he slept with their sister/best friend/room mate. This often is a swift way to kill a relationship. But none of this could get Jake or Lainey ready for eventually bumping into each other at a sex addiction meeting. Here starts a fabulously written playing field of friends vs. being in a relationship. They both realise that having sex is often why their relationships fail, so they decide that if the sexual tension between them becomes too much, they will kill it with a safe word.

The premise of Sleeping With Other People is charming, funny and full of twists and is often filled with some standout 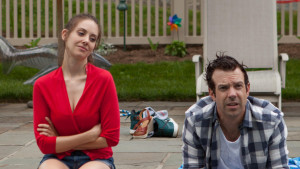 moments (including when the pair go to kids birthday party, high). The central two characters are loveable and just cartoonish enough, without pushing them into a sphere where the audience cannot sympathise with them. They often do things wrong and they aren’t sure how they really feel for one another – which is completely fine and great to see on screen. Brie in particular is great because she plays a woman in control of her own sexuality and sexual desire, she knows what she wants and when she wants it. She is funny and serious, sexy and innocent and seeing all these juxtapositions in one character makes for interesting viewing but also proves that there is some great writing and acting talent behind the film.

As with any romcom that will ultimately have a happy ending, there are twists and turns along the way. Secrets are unveiled and both Jake and Lainey start other relationships but there is the question of whether they are really happy. The film presents the question that others like Friends with Benefits and No Strings Attached tried to ask, can men and women be friends without having a romantic relationship but Sleeping With Other People felt like the most emotionally invested in it’s characters.

Despite a brief dip in the middle and the feeling that at points, the film is just going through the motions to get to its eventual ending, it’s a solid film with great performances. Recommended for a quiet night in with the girlfriend/boyfriend and a big glass of wine.

Sleeping With Other People is available on DVD and to order on Amazon from Feb 22, click here.