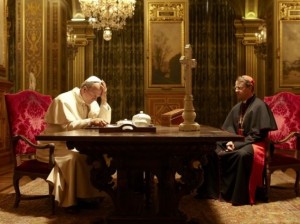 The Jewish Cardinal is the true life story of Jean-Marie Lustiger, a French cardinal of the Roman Catholic Church. He was Archbishop of Paris from 1981 until shortly before he died. In 1983 he was ordained a cardinal by Pope John Paul II. But the twist in the tale is that Lustiger was actually born Aaron, to Ashkenazi Jewish parents. For his entire life, he always remained solid that he was both Catholic due to his conversion and Jewish, as he was born into the faith, and that can could never and would never change.

Iilan Duran Cohen’s made for TV movie, follows those first vital steps that Lustiger took as he was quickly promoted through the Church and the battles that he was made to take part in receiving ridicule and difficulties from both those in the Catholic Church and those of the Jewish faith.

All this tension in the film builds up to the dramatic events that cause Lustiger to be caught between both religions, becoming a meditator between the two faiths. As it is pointed out in the film, it is difficult for one to hold onto their Jewish faith and identity, when they believe in Jesus, without renouncing one over the other. When Carmelite nuns build a convent in the Auschwitz concentration camp, this upsets and angers a lot of Jewish people and organisations including CRIF; it was down to Lustiger to negotiate with the Church and figure out a way to ensure the nuns left the site.

At it’s heart, The Jewish Cardinal, is a film about separation, differences and reconciliation between two faiths that have grown further and further, but really come from the same seed.

Unfortunately, whilst the film does have the best intentions, the finished product was boring and a touch crass. The script is really quite 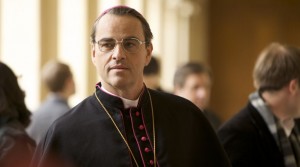 lazy, forgetting to explain to the audience the history behind the story as well as representing people like Pope John Paul II in a rather relaxed and unimaginative light. None of the actors really present a sense of urgency in the film or importance for what they are talking about and instead, it seems the cast themselves were pretty bored with the entire thing. Whilst there are points when it seems the film is going to pick up; perhaps a sense of mystery why Lustiger is quickly being promoted, the film stops in its tracks and move towards something different. Performance wise, whilst Laurent Lucas is quite compelling as Lustiger, Aurélien Recoing was a really quite awful Pope – his delivery was disconnected from the story and he seemed really quite out of place.

The film was also made for television, and one could imagine it being split up into parts – perhaps it would have been more enjoyable that way. Nothing remarkable happens on screen, and when the dramatic height of tension is reached during the argument of the convent, it seems to have been resolved in a matter of minutes rather than representing the actual issues around the site. 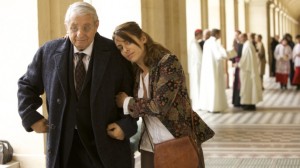 In one highlight of the film, one moment when it seemed to be getting better and finally realising it was okay to represent a sense of emotion in the characters, Lustiger had visited Auschwitz for the first time and the audience are already aware this is where his mother was killed. He almost has a panic attack and has to walk away; Cohen’s camera finally understands what to do and presents a hurt man crying out for his dead parent in a place of such evil. The camera sweeps over the location and swells the screen with colour, compassion and emotion but alas that feeling does not happen again.

All in all, the film has the right intentions but unfortunately it just doesn’t provide the goods necessary for dealing with such an important story. Whilst the good bits of the film really are excellent, there is a worry they only seem so compared to the rest of the film.

The Jewish Cardinal was the opening film of the UK Jewish Film Festival 2013, for more information, visit: http://ukjewishfilm.org/film/the-jewish-cardinal/