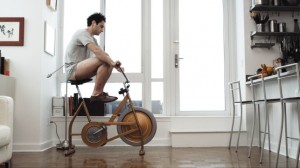 Blumenthal is hilarious; that is probably a good place to start about this little comedy with a big, sarcastic heart. The multi-talented Seth Fisher has directed and written (he also stars in) his first feature length film, a comedy about a family who are mourning a death but none of them quite know how to react. Harold Blumenthal (Brian Cox), a famous playwright who has made a career writing parodies and stories about his own family and those around him suddenly dies, laughing at his own joke at a revival of an old play of his – ironic isn’t it?

He leaves behind his brother, Saul (Mark Blum) who holds grudges and hang-ups about his relationship with his brother and this leaves him with chronic constipation. His wife, Cheryl (the beautiful Laila Robins), who for the entire film holds a sense of mystery about herself; the first time she is seen on screen she is starring compassionately and lovingly at the television screen watching a tribute for the dead writer but it turns out that is her brother-in-law and so therefore this leaves a sense of wondering about her relationship with him before his death. Furthermore, she is also worried that she is no longer beautiful and is starting to look old, so she looks into plastic surgery and having an affair with the dog walker. Lastly, Saul’s son, Ethan (played by the hilarious Fisher) who has to deal with his own personal obstacles along the way; he doesn’t realise that he has found the perfect woman and does everything he can to scare her away.

This is the closest cinema has come to finding a new Woody Allen in years, bearing comparison with early Allen in writing and acting. 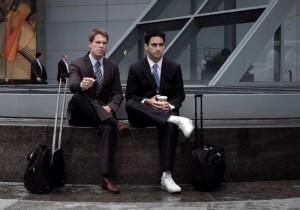 Fisher manages to explore in a hilarious way, something his character names, ‘Jewrosis’ – a particular sense of self loathing and guilt simply because of their Jewish identity. Ethan isn’t sure what he wants in a woman; if he goes for someone who isn’t Jewish, she wouldn’t understand his issues and then just get on his nerves but if he goes for a Jewish woman, then she would most the time, probably end up just like his mother. Then half way through the film comes the question about being second; none of these women are virgins and tonnes of them have been married before – this simply isn’t good enough for Ethan. And hilarious is the conversations about Ethan’s footwear…

Saul believes that to get over his issues, he just needs to get his hands on Harold’s lifetime achievement award, which he can call his own because he believes that Harold’s work is stolen from his. If he can make himself feel better, then surely he will feel better about the death of his brother, whom he hadn’t spoken to in years and be able to go to the toilet. What does he do?

Gets his son to find out where the award is and fetch it for him. Along the way, Ethan meets Fiona (Nicole Ansari-Cox), Harold’s lover who has been collecting his post since his death. Their initial meeting is a true example of the brilliant writing of the film; on asking about her accent, she reveals she is from Koln and Ethan asks whether that is in France… no it’s Germany. Later in the film when she reveals to Saul the same information, he says that he knew that was Germany and too many people get it mixed up the France because of the fake perfume. It also turns out that Fiona, for many years, was Harold’s ghostwriter and in fact Harold hadn’t written for a long time – this really turns things on its head for Saul as he works out how to react.

Fisher also ties the film together in a brilliantly simple structure; every so often the audience are taken back to an interview on television that Harold did about his work, his life and his family. He has a lot of strong opinions, which he makes clear but quite often these mark the start of a new chapter in the film where he is introducing what is going to happen. Even more cleverly, these points often remark about his families behaviour and are hilarious in how judgemental they often are.

Meanwhile, Cheryl, has been auditioning for a new television role in a script, which is okay but it is work at least. She thinks she hasn’t got a chance as she isn’t as young or pretty as the other women, but it turns out they are interested in her. Yet, she cannot lose the feeling that something is going wrong with her. When she notices the young, handsome dog walker has been giving other women in the neighbourhood hugs, she floats the idea of having an affair with him to make herself feel better – the issue is, he is gay.

Blumenthal is an important film because it makes lighthearted the guilt that so many Jews talk about feeling. It doesn’t necessarily take itself seriously but at the same time is expertly written and beautifully filmed. The chemistry between the actors is brilliant and they all look as if they have been having fun on set. This is a fast paced, hilarious film with a good message and an even better outcome.

Blumenthal is screening as part of the UK Jewish Film Festival 2013, take a look here for more information: http://ukjewishfilm.org/film/blumenthal/