Hello I Must Be Going Review | Jewish Film Festival 2013 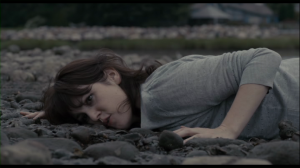 Melanie Lynskey was made famous when she played opposite Kate Winslet in Heavenly Creatures, they were the daughters from hell and did anything they could to get away from their families. In Hello I Must Be Going, Lynskey plays the opposite, as the recently divorced Amy who moves back home to her parents after she loses everything including her sanity. She has deep depression that she has no intention of sorting out and instead mopes around her parent’s house all day in the same sodden t-shirt. Her mother, Ruth (Blythe Danner) is overbearing and judgemental to say the least and is much more interested about what she can tell the neighbours about her daughter, rather than checking how Amy is doing herself. Her father, Stan (John Rubinstein) is the complete opposite, letting her get away with whatever she wants and making sure she is constantly okay, whilst growing more and more nostalgic for the old times together (as represented by the Marx Brothers videos Amy watches throughout the film).

When Stan has potential clients over for a meal one day, Ruth has ensured that Amy has changed into a dress and looks pretty because honestly that is the most important thing. Gwen (Julie White) and Larry (Damian Young) bring their young, actor son, Jeremy (Girls star Christopher Abbott) along with them and sparks fly almost instantly between Jeremy and Amy across the table. As the dinner ends, the couple quickly engage in a kiss that catches Amy off guard and from there on in, they start a very sexual relationship, meeting where they can without being caught by their parents. This lays the way for Amy to start to get back in touch with herself, realise her own self worth and get back on the horse.

Hello I Must Be Going is not a story we haven’t seen before and yet it is just trying to do it in a slightly different way. It is filled with self aware, quirky, 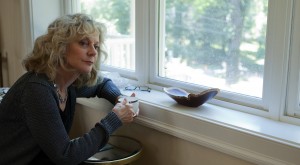 Junoesque dialogue, that quite often see the performances of the cast not quite able to manoeuvre their way around and yet when they do start to understand their characters, the script starts to dip. There is plenty of missed opportunities in the film as well; Ruth, could have been an over the top, Jewish mother who wants to order her fully grown daughter around but more often than not, she just comes off as a bitter bitch, which really becomes one of the biggest let downs of the film.

The chemistry between Lynskey and Abbott is rather beautiful on screen; they seem to balance each other out visually. They say more to each other with their eyes than the dialogue itself and their bodies move in tandem together in the sex scenes. Sarah Koskoff’s script seems to try and be another Prime (Uma Thurman, Meryl Streep etc) but without the laugh out loud moments and whilst it is clear that this film is meant to be much more emotional, reflective and personal, it just leaves you with a rather unmemorable film.

This is not to say there aren’t some brilliantly hilarious moments; one of these moments is when Ruth is talking to Amy about Jeremy and how his step mother, Gwen, is sure he is gay. This conversation takes place a while after the couple start sleeping together, so Amy starts to choke with laughter on her food. It is a funny moment, everyone around is so sure that he is gay, he is an actor after all and yet, the audience are in on this personal joke, which brings them much closer to the character and the story.

The characterisation is the strongest thing about this film; it takes someone like the dreamy, spiritual Jeremy to come along and show the down and out Amy that life is for living and when you get knocked down, that you have to grab the bull by the horns and get on with it. This is best shown during the scene when she meets with her ex and demands their property split is relooked at, she wants more money, money that she deserves. It isn’t until she rediscovers innocent love from Jeremy that she has the strength to get up and go on. 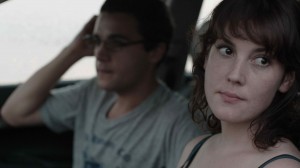 Hello I Must Be Going wears it’s heart on it’s sleeve, it is completely aware of what it is doing. Whilst the story is quite charming and the film is quite funny, it is the lack of anything brilliant in the film that unfortunately lets it down. The most clever thing about it is the integral switching of gender roles in the film; whilst many indie comedies these days spend their time looking at a self effacing male protagonist, it was good to see Lynskey plays Amy, in this very well thought out role. It is just a shame that the finished product isn’t as good as the proposed plan.

Hello I Must Be Going is screening as part of the UK Jewish Film Festival 2013, take a look here for more information: http://ukjewishfilm.org/event/hello-i-must-be-going/