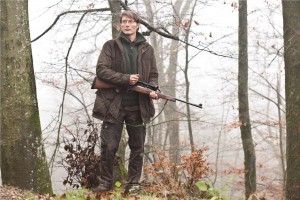 For The Hunt (Jagten), Thomas Vinterberg inverts the premise of his 1998 debut feature, Festen. That film presented its twist early on: at a wedding, the bride’s brother reveals in his speech that he and his late sister were frequently abused by their father during childhood. In The Hunt, a kindergarten teacher finds himself wrongly accused of molesting one of the children. Like the earlier film, this – co-written with Vinterberg by Tobias Lindholm (whose second directorial effort, A Hijacking, also screens at London this year) – demonstrates its director’s refreshing willingness to fully commit to emotionally challenging drama and tease out subtleties all-too-often shirked.

The accused is Lucas (Mads Mikkelsen), the accuser Klara (Annika Wedderkopp). Daughter to arguing parents Theo (Thomas Bo Larsen) and Agnes (Anne Louise Hassing), Klara’s admiration for Lucas turns to confused hurt when he diplomatically returns a gift she has left for him at the nursery. One night, in unthinking haste, she hints to Grethe (Susse Wold), another worker at the nursery, that Lucas’s penis “sticks out”. Grethe, concerned, pushes Klara for further information, and the next day confronts Lucas about it. Advising that he should temporarily leave his post, Grethe foregoes professional conduct and catalyses a communal hysteria that denies Lucas an outlet to rationally defend himself or pacify the outrage of those around him.

From the onset, however, we know Lucas is innocent of such wrongdoing. It is clear, firstly, how impressionable Klara is. Already precocious, she has inherited a cheekiness from home, repeating her dad’s go-to line in response to chores or people: they “can have a kick up the arse”, she tells Lucas. Furthermore, her careless reference to Lucas’s penis, we know, stems less from her imagination than an exposure in an early scene to a pornographic image shown to her by her teenage brother and his friends. Placing us in no doubt as to Lucas’s innocence allows the film’s makers to tell the drama from almost a thriller’s perspective: Lucas is a Hitchcockian Wrong Man but for the fact that his stakes are relatable and palpable rather than the outcome of international espionage. Indeed, so much rests in this film on what is firstly said (and not said) and secondly construed (and misconstrued); on what is accepted as the truth and what is dismissed.

Individual scenes are compellingly maddening. Grethe’s confrontation of Lucas seems at first tactful, but her incompetence and lack of professionalism quickly rear their ugly heads. As rumours spread, Lucas becomes more and more isolated. That he is best friends with Klara’s dad, Theo, makes for some of the film’s most emotionally charged moments – and also the key to the narrative’s resolution. Some scenes are absurdly comic, such as that in a supermarket whose staff have banned Lucas from entering. Others implicate irrationality and sensationalism as the governing forces of societal undoing: note that scene in which Klara, realising the extent to which things have escalated, confesses that her clumsy accusation was fabricated, only for her mother to dismiss it as fearful backtracking. Such absurdities implicate some of the adult characters as the film’s most immature. Indeed, the film’s title refers to the ceremonial ritual that begins and ends the film, in which, as one character says, “boys become men and men become boys”.

Some liberties are taken. Where, for instance, are the police? Their presence here is minimal – though dealing with the legalities off-screen does allow the script to retain a sense of claustrophobia. There is, meanwhile, a too-symmetrical illogicality to the way in which Lucas’s innocence is eventually acknowledged – though the scene in which this occurs might be the film’s most powerful. Such conveniences notwithstanding, however, this is often superb stuff, shot with profitable clarity and a sharp warmth by cinematographer Charlotte Bruus Christensen. The performances are excellent: Mikkelsen and Wedderkopp are particularly outstanding. The film’s real achievement, though, is its commitment to a comparatively basic premise. Watching The Hunt wanting it to follow through upon the dramatic promises its scenes make, you’d be forgiven for fearing this won’t be the case, and for consequently half-wanting certain scenes to end before they do. But as with Festen, this evinces and sustains a dramatic depth even up to its final moment, a suggestive flourish that recalls Taxi Driver‘s (1976) denial of a wholly sweet conclusion.

‘The Hunt’ is part of the London Film Festival’s ‘Dare’ strand and screens on Monday 15th October in addition to previous screenings on 11th and 13th.