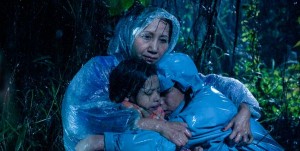 From its vivid and dystopian opening shot to its near 15 minute long closing scene of gut wrenching emotions, Ming-Liang Tsai’s Stray Dogs is a gallery of the moving image telling a story of human endurance. Tsai unveils a simple two part narrative of the life of a father (Kang-Sheng Lee) and his two children in Taiwan. The first section depicting the daily struggle and mundane routine the parent must go through to earn enough money to feed his children. The kids themselves wander aimlessly around the town before all three return to the dilapidated building they call home.  Though the film is made of a limited number of scenes, Tsai and his team show immense endeavour in each frame. The realism of the situation is rendered in striking detailed portraits, an image to be studied, full of such rich content and style that 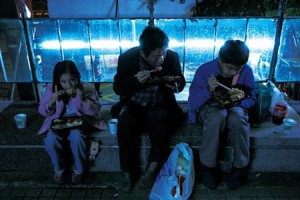 juxtapose in an immensely satisfying fashion.

During the first act we meet a kind of guardian angel character (Shiang-Chyi Chen), a woman whom we see meticulously manage the supermarket  taking any leftover food from the day to a group of stray dogs at night. In the second act she becomes the saviour of the children and their father. After displaying the difficult processes of daily living in the first act, punctuated by Kang-Sheng’s one crippling moment of despair before he turns to alcoholism, the second act appears far less harsh, at first. Though the children at least have food and a warm place to sleep, Kang-Sheng has far greater, long earned troubles. In the final unflinching seen, his redemption is placed on the edge of a knife. Staring deeply into the now matriarch’s eyes, as well as Kang-Sheng’s, the growing intensity of Tsai’s unflinching gaze exposes everything. Tears flood down his face like the rain that used to crash through his roof. His roof no longer leaks but his life is still inundated with desolation.