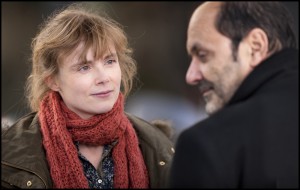 To say something is just an average French drama is not necessarily a criticism; it is a genre that the nation seems to produce gems in at a casually prodigious rate. Looking for Hortense does not jump out as something particularly special yet it is a very entertaining and engaging film. Pascal Bonitzer’s story of a distanced couple whose paths are beginning to diverge is scintillating at best though sometimes feels stretched and contrived. The two leads are fantastic but although Kristin Scott Thomas’ name is put at the forefront it is Jean-Pierre Bacri who steals the show and it is his magnetic qualities that transcend any scripted issues and make this film so very watchable.

As Iva (Kristin Scott Thomas) starts work on her new play she begins to find herself becoming too close to her lead actor. The opening of Looking for Hortense is a welcoming into Iva’s world. She is a respected playwright and director, a strong woman who still has the looks to attract men 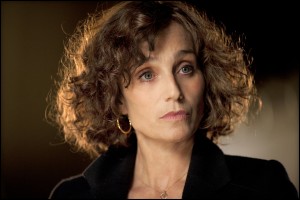 considerably younger than her. She resists these advances; she is married to Damien (Jean-Pierre Bacri) although they immediately seem estranged. Damien is a lecturer of Chinese Civilisation, himself drawn to another woman. He is asked by Iva’s sister to help her friend Zorica (Isabelle Carre) from being deported back to her native Serbia and it just so happens that this is the very woman he covets. The film follows Damien primarily as he struggles with the breakdown of his relationship and the effect it will have on his son Noe (Marin Orcand Tourres).

At times romantic and at times sorrowful, Looking For Hortense analyses a 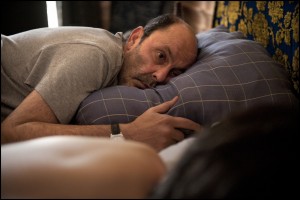 relationship that seems to have come to its natural end, there are no impassioned speeches though both parties are distraught. Yet there is a lesson here that separation can be angst free, to a degree anyway. There is plenty of room for drama, the potential deportation and the confrontation of Damien’s father, a truly captivating and hilarious Claude Rich. The couple’s lives have already begun to revolve around others with the two spending little time together, the audience are granted a look at the dying remnants and the new paths each begin to tentatively tread on. Never spectacular but carefully handled, Looking for Hortense may be slightly trite but in the end Bacri will win over with a superb performance worthy of the top billing.