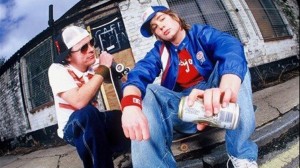 The Great Hip Hop Hoax was a hit at this years SXSW and has finally arrived on UK shores. Jeanie Finlay expertly explores the story behind rap group, Silibil N’ Brains, and how two Scottish white guys were able to persuade everyone in the British music industry that they were a pair of newly discovered rappers from California, USA. Some may have heard of Silibil N’ Brains, others may not have but they were described as Eminem meets the Beastie Boys and for a period of a few years during the early 2000’s, many people thought they would be the next best thing. What no one counted on was that this new rap band, who had a contract with Sony Records and were managed by one of the most powerful men in the music industry, were actually playing one of the biggest hoaxes in music history.

Gavin Bain and Billy Boyd were the brains behind the band; they wrote their own songs and came up with their own rhymes, but as they 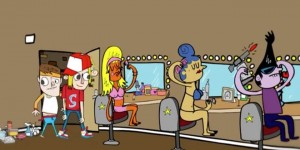 explain in The Great Hip Hop Hoax, when they came down to London as a Scottish band, they were laughed at. No one would take their calls and it seemed despite their talent, just because they were white and from Scotland, they would not be taken seriously. When callings clubs in London to see whether they could arrange a gig, the phone was constantly put down on them until on one of the calls they decided to pretend they were from California, they put on fake accents and tried it out; this time they picked up some interest and it took that small decision to ultimately change their lives forever.

Collated together through interviews with the guys today, their families and those they worked with at the time alongside captured video of when they were a band in London, The Great Hip Hop Hoax is a wonderfully structured journey following the band in Scotland, to their decision to move to London, the highs of being signed and suddenly being given a lot of money all the way to the breakup of their friendship when things became too much and Gavin’s mental delusions and issues that he suffered from living this lie for so long. It is briefly mentioned towards the start of the documentary that the pair literally lost their identities because they really started to believe the lie and this affected not only their relationship with each other but with those around them. This also meant they start to abuse alcohol and it is briefly mentioned, drugs as well. 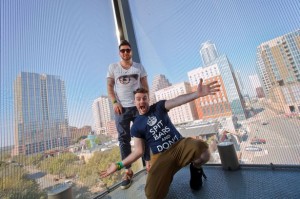 The documentary easily brings the audience in explaining each step of the journey along the way, therefore making it easy for those who aren’t aware of the band as well as those who already knew the story and the revelation of their lie. Finlay lets the pair explain what was arranged for them when they were signed, recording space and money, these were things that they craved and yet whilst they were to be Scottish, were to never have. What The Great Hip Hop Hoax does do, is question the band without ever judging them for what they had done but also poses some great thought provoking comments about the status of celebrity and stardom and the price they had to pay for it. Furthermore, the film uses some really surreal and interestingly created animated set pieces to illustrate what they don’t have on camera; and these pieces further the oddness of the situation they found themselves within.

Whilst they never managed to put out their first album, it remained in production whilst Sony and BMG merged and cut the artists that weren’t producing money for the studio, their music is still available online to listen to. The Great Hip Hop Hoax is a compassionate and light documentary that examines what happens when fame gets in the way of your own identity, friendship and family. It is a great watch and is highly interested and entertaining.