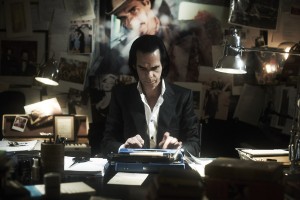 20,000 Days on Earth is frankly divine and monumental in the changing tide of the documentary film; part music documentary and part open journal of a man’s life with a delicate structure and stylistic science fiction sheen aesthetic, it tells the story of a man who is just trying to live, trying to work out what he is doing on this planet and make the most of his world by enjoying himself. Nick Cave, some may know him and others may not, but his career has certainly been something worthy of celebration from his duet with Kylie Minogue to his The Proposition (which Cave wrote) starring Ray Winstone, this man is truly something of a renaissance artist, dipping his fingers into any area he can dig himself into. Most importantly this is a man who has gone through rough waves in his life and has come through the other side to tell the story.

Filmmakers, Iain Forsyth and Jane Pollard along with Cave decide to celebrate his 20,000th day on Earth by following him and witnessing a day in the life of Nick Cave. From his interactions with wife, Susie Bick, to visiting old friends and acquaintances and a lab filled with his own personal history, the pair bring the audience intimately into the life of Cave and break down any barriers between the rock star and the audience. In between these conversations, there are flashes to other times of making his most recent album – ten minute performances watching this incredibly inventive man come up with music that sounds like no other, teaching a choir of young children sections of his songs to feature on the album and getting ready for live performances in front of adoring fans who know the lyrics as well as Cave himself. 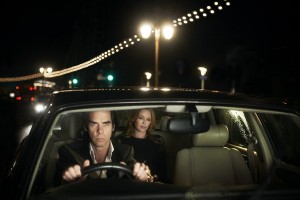 A further layer, subtle and frank is added to this inspiring film; when Cave is riding in his car from one place to another he is visited by ghosts of his past including Minogue and Winstone. They chat with him about the specifics moments in time that they worked with him; what he was thinking and what he wanted in that period of his life. The film opens up the persona of the star on the stage like no other music documentary has done before and makes the audience realise this is just a normal guy doing something he loves and hopefully making other people love it as well. There are moments that the film touches on intense and dark parts of his life but they are juxtaposed with the excitement that his music brings to others.

What makes 20,000 Days on Earth so powerful and important is the open access to Nick Cave and how the filmmakers have never for one moment judged their subject. Whilst he is talking about drugs, he opens up and when he is talking about the relationship with his parents, it is Cave himself that is directing the focus of the audience. There is a complete openness and willing to communicate, which keeps this film fresh and interesting – preserving a sense of urgency. For those who are fans of Cave but also those who may have never heard a single song, 20,000 Days on Earth is a feat in documentary filmmaking and sets the bar high for those to come. The film is beautifully made and delicately moves from one story to another, allowing the audience easy access until the very end.