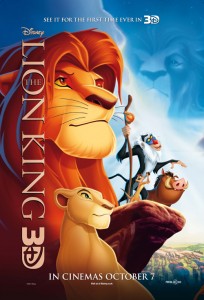 Amidst cries from critics and audiences that 3D as a format was dying, Disney released this, possibly their greatest masterpiece, back into cinemas in 3D. One weekend and $30 million later and suddenly 3D is revived, kept alive at least as far as Tintin later in the year. A gross now of just under $80 million shows that one thing is clear: the power of The Lion King endures even to this day. Now sitting in the top 20 highest grossing films at the US box office, Allers’ and Minkoff’s mammal Hamlet has such massive popularity that one has to ask why this is so.

Part of the appeal could be the music: infusing african rhythms and vocals with the lyrics and easy pop of Elton John and Tim Rice, The Lion King features some of the most memorable and enjoyable music in any Disney film. The opening strains of ‘The Circle of Life’ featuring a lone Zulu voice (singing, for those interested, “here comes a lion, father”) are now immediately recognisable in pop culture, but one shouldn’t forget the sheer power of this song and the images that accompany it. It’s automatically showing that this is Disney trying something a little different, yet somehow retaining the magic that makes the studio’s films appeal so much to children. This may be a romanticised view of Africa (or, more specifically, the Serengheti in Tanzania and Kenya), yet it is nigh on impossible not to be drawn in by the beauty of the music and animation.

For yes, the animation truly is stunning. Want some evidence? Just look at the storks flying over the waterfall in the first song, or the gentle sway of the grass as Simba paces around, torn between past and present. The scene in which he returns to Pride Rock, a tiny figure running across a desert in a wide angle shot combined with the movement of his legs shown up close, gets much of its power simply from the evocative framing of the shot. Every cell bursts with life and beauty, the landscapes crammed with detail and the characters distinct and dramatic in their own ways. Yet the vivid colours of ‘Just Can’t Wait to Be King’ and the haunting, horror inspired imagery of fascism in ‘Be Prepared’ display a variety and experimentation that means The Lion King is also one of the most visually interesting films the House of Mouse has produced, as well as one of the most beautiful.

However all the music and animation, as brilliant as they are, all contribute to the one aspect of The Lion King that makes it so popular: the story. People of all ages are so happy to return to it again and again because of the warmth of the characters, an investment in a gripping and universal story, and because one can experience a whole spectrum of emotions all over the course of an hour and half. There’s no film quite like it. 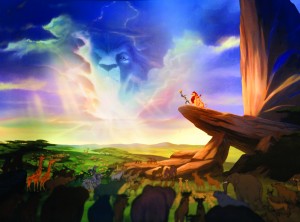 It is a shame, therefore, that it has to be re-released in 3D. More than just adding nothing to the film (and it doesn’t, at all), it actually detracts from it. Aside from the usual problems of getting a headache due to issues of convergence and focus (explained brilliantly by leading editor Walter Murch here), it also reduces the colour of a film significantly. In technical terms, the difference between a 2D film and a 3D film is 3 units (known as foot-lamberts) of brightness, which, considering a 2D film is only 16 foot-lamberts bright, contributes to a massive difference in the look of a film. In a movie as vibrant, brightly colourful and exuberant as The Lion King, to reduce the colour of it so much is a rather sad thing indeed.

This film still gets 5 stars from me because it is, without doubt, one of the finest animations ever and it’s brilliant to watch up on the big screen again, regardless of the 3D. However I would be much more ready to endorse the re release of the film had they shown it once more in all of it’s beautiful, hand drawn, 2D glory.

Come back to Front Row Reviews tomorrow for Part 1 of an interview with Robert Guillaume, the voice of Rafiki in the Lion King.