Making 300 look like Bambi, Immortals is a brutal but brilliant epic which refuses to pull its punches. 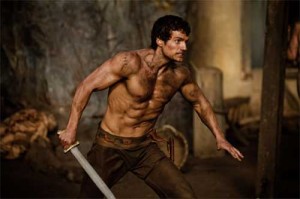 Based upon Greek Mythology it follows Theseus (Henry Cavill) as he stands up to the crazed King Hyperion (Mickey Rourke) and his legions who wish to bring the world to its knees. In order to stop him he must find the Epirus Bow, a weapon of unimaginable power which only mystic Phaedra (Freida Pinto) can help him find. The casting of the leads is brilliant. Henry Cavill is also strong as Theseus, managing to create a believable character despite extraordinary circumstances. His role in the Immortals should certainly put viewers’ confidence in him for the upcoming Superman movie Man of Steel. Mickey Rourke clearly relishes every minute of screen time as King Hyperion, a villain so overly evil he could be out of a pantomime. Even after mercilessly murdering a main character he pauses afterwards to check his nails.

The extreme nature of the Immortals is definitely part of its appeal, refusing to hold back. Men are castrated, heads are lopped off and tongues are removed. But none of this is ever done to shock but to help to tell a story which is just as violent and shocking as the Greek Myths Immortal’s bases itself on. The battle scenes themselves are beautifully set out in slow motion and flow with ease. 3D for once actually benefits the action with the technology never being used gratuitously, merely to enhance the onscreen exploits. It is particularly stunning when Theseus charges directly into Hyperion’s army, fighting his way through numerous enemies as spears fly past his head.

Director Tarsem Singh’s strong visual style adds much to Immortals, with the nightmarish landscapes and an unsettling choice of visuals. Unlike recent bloody epic 300 which seemed like a computer game with its sepia toned drab visuals, each frame of Immortals 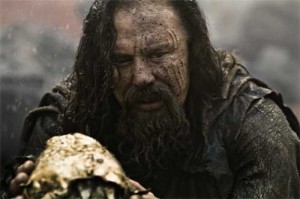 looks like a rich painting. Just like Singh’s past movies The Cell and The Fall, his artistic imprint is stamped all over the 110 minutes running time.

Immortals certainly is not the most intelligent piece of cinema this year but it is by far one of the most entertaining. It’s blend of well choreographed fight scenes, stunning visuals and great characterisation make it a must see.