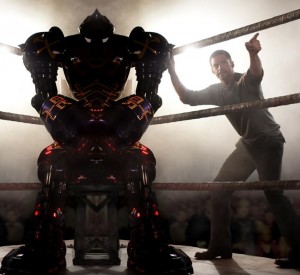 One of the most anticipated events at Empire‘s Big Screen was Disney‘s showcase of their upcoming releases.

Real Steel will no doubt be a big hit this year and stars Hugh Jackman as an ex-boxer who trains up a competitor for the robot boxing league. The director Shaun Levy compared it to Rocky and Chariots of Fire, saying that it was essentially an underdog story. He then presented a couple of clips from the final version of the film. The first saw Hugh Jackman’s character pit his robot against a rival in the ring in a well choreographed fight scene. The second followed Jackman’s character and his soon scour a scrapyard to build a new robot to enter into tournament. Overall Real Steel looks to be an Autumn hit and will be released on the 14th October 2011.

The other big movie revealed was John Carter, an adaptation of the classic comic. It follows an American Civil war veteran transported to Mars where he encounters the violent natives.  At present it appears to be a children’s version of Avatar and has fairly average uses of 3D, but perhaps the final version will be an improvement on the clips shown. John Carter is set to be released on the 9th March 2012.

After the two previews, several trailers were shown, including a teaser for The Avengers. Despite not revealing much, its made clear that there is definitely a lot of onscreen chemistry between the leads and with Joss Whedon at the helm it will definitely be worth checking out when it is released on the 4th May 2012. A trailer was also shown for The Lion King 3D, which looked great with the conversion. Pixar’s latest effort Brave was shown briefly in a teaser, but sadly no new footage was shown. It will be released on the 17th August 2012.