The Avengers Age of Ultron Review 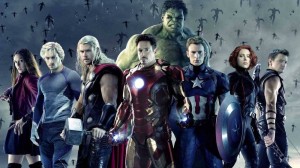 The Marvel universe is starting to come together, as each release passes by, the audience delve deeper into the comic book world and its mythology. As one story leads into another, the true power of their world really shines as they come together and this is why The Avengers Age of Ulton works so bloody well. Where not one character leads the pack, where not one of the actors is a weak link, Joss Whedon has once again assembled an astonishing cast in what is a monumental moment within these characters stories.

Featuring old faces; Scarlett Johansson, Chris Hemsworth, Robert Downey Jr., Chris Evans, Jeremy Renner, Mark Ruffalo and Samuel L. Jackson but also starring Aaron Taylor-Johnson (who makes his appearance as Quicksilver), Elizabeth Olsen (a welcome addition as Scarlet Witch), Paul Bettany (wow’ing everyone as The Vision) and the voice of James Spader (as the terrifying Ultron)… and that is the main storyline alone! There is no use forgetting that a whole host of other characters from the backgrounds of Captain America, Thor, Hawkeye and Iron Man’s world appear in this singular masterpiece of the superhero genre.

For those engrained in this world and for those who are still to gain entry, The Avengers Age of Ultron is a great introduction, an incredibly beautiful and masterfully structured adventure film, gripping to the very end.

Tony Stark (Downey Jr.), known for his work with technology and never leaving things alone tries to awaken a peacekeeping program otherwise known as Ultron. What he doesn’t count on is that Ultron will react somewhat badly to be woken. Ultron makes one decision pretty quickly; that for the world to be at peace, he must wipe The Avengers from the Earth. Of course this isn’t taken too well and when Ultron makes a quick second decision (should have really thought these things through…) to actually destroy the Earth and everyone on it in aid of his own type of evolution, he royally pisses this group of Superheroes off. But things aren’t always as they seem and Ultron’s power quickly multiplies, escaping Stark’s technopalace and working on his own plans for destruction.

Meanwhile, Quicksilver (always nice to see a bit of Taylor-Johnson) and Scarlet Witch (a scene stealing Olson) meet Ultron and are persuaded to 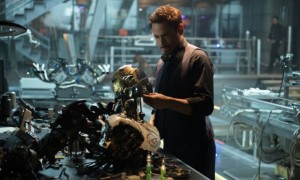 help him. They are tormented by their own past; the death of their parents, which they blame on Stark and therefore seeing the destruction of The Avengers (in their eyes) would be no bad thing. They decide that they will break the group up from within, rather than physically hurting them, by revealing their worst nightmares (a nice little thing the ol’witch can do), The Avengers will crack apart themselves. Seems like a cunning plan!

But what Whedon does alongside this epic world saving situation is to make his characters ‘real’, he delves deep and not only into their nightmares. He lets Johansson and Ruffalo share delicate and important screen time, allowing their relationship to build as the Black Widow and The Hulk fall in love. Debating the hurt and pain they are each causing the world and themselves, in their eyes, they will never allow themselves to be happy and with one another. Whilst Hawkeye’s (Renner) family; his wife and children and introduced, giving him a family man dimension, something that other members of the group are jealous of.

Spader’s Ultron is scary; initially damaged remains from Stark’s lab, crawling and creeping, he confronts The Avengers and tells them his plan. He plays games with them and taunts recklessly. Ultron understands his own power and even knows that he is likely to beat The Avengers. As his power grows throughout the film, his confidence booms across the screen and swallows everything up with it. 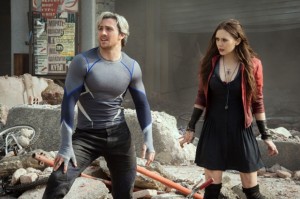 Finally, the action sequences themselves are sensational. They are carefully choreographed set pieces, which grab hold of the audience and promise to never let go. Allowing the characters to spring into action, Whedon blows so much colour across the screen, moving fast enough to keep up with the characters but not so fast that the audience feel sick with intensity. Every single movement is thought through and beautifully shot.

The Avengers Age of Ultron is a lot of fun and a damn good film; it ticks so many boxes for so many different audiences. You get the comic book geekery, Joss Whedon’s charm and wit, a powerful and gripping adventure story and if you fancy a little bit of man candy (you know what what I am talking about ;)) then you don’t have to look too far either.