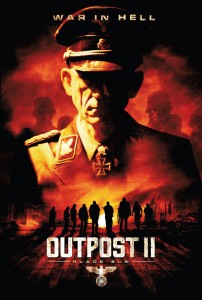 There have been some great ‘Zombie’ films of late with inventive Directors have kept finding new ways to breathe fresh energy into the genre. Sadly Outpost 2: Black Sun, the sequel nobody was waiting for, certainly is not within this bracket and does little with an interesting concept.

Black Sun picks up where the last film last film left off as Lena (Catherine Steadman) and Wallace (Richard Coyle) go in search of the electric force which has been keeping an army of ‘Nazi Zombies’ alive. What ensues is a snore inducing hour and a half, which is surprising lacking in Zombies, tension and likeable characters.

The main problem with the film is that it cannot decide what its purpose is. There are no scares or tension for this to be a horror, with the monsters themselves being invincible and about as menacing as Elmo. At the same time there are not enough action or pacing for this to be a thriller. What remains is very slow paced and tiresome.

The acting is nothing spectacular, with a series of forgettable characters spouting out lengthy exposition laden dialogue. Coyle’s American accent is painful and pointless. Why his character could not remain British is a mystery and it certainly would have been less distracting and irritating. Catherine Steadman is a very talented actress and will hopefully go onto bigger things as she is definitely capable of stronger performances and roles. 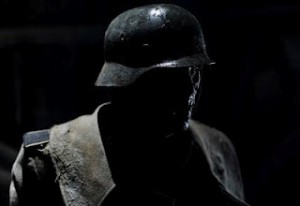 Perhaps the biggest shame is that this thriller opens so strongly. We see Steadman walk into a retirement home to confront a Nazi General and the stand off between the two is both compelling and well played out, as both of their secrets are unravelled. If the plot had solely focussed on Lena’s character the film may have been a lot more captivating that what it was.

Overall this was an unneeded and pointless sequel to an average film, which lacked pacing and character.

During the screening Ian Rattray hit the nail on the head when he publicly asked Director Steve Barker, “You’ve just made Outpost III. When are you going to stop? Will you just go on and on? Surely it’s just the same film?”. Sadly Barker will keep going and going and Outpost 3 is on its way…