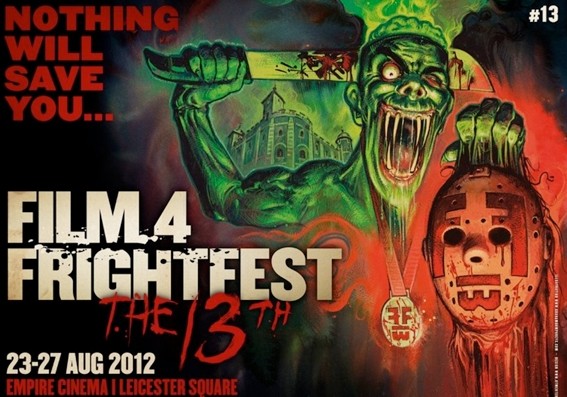 Front Row Reviews are excited to announce they are covering the 13th year of Film4’s FrightFest, which returns to the Empire Cinema in Leicester Square to present 48 films, with Empire 1 housing the main event, and the Discovery and Re-Discovery strands being housed in Empire 4 and 5. There are 11 countries represented this year, with a record-breaking 15 world premieres and 23 UK or European premieres.

This year the festival is also giving a prominent focus to the past, present and future of the Italian genre scene with Federico Zampaglione’s much-anticipated neo-giallo Tulpa and the Manetti Bros’ Paura 3D and The Arrival of Wang. Plus Total Film magazine’s Guest Icon this year is the Italian Master of Horror himself, Dario Argento and there’s a screening of the documentary Eurocrime!, which celebrates the ‘poliziotteschi’ movies that ruled Italian 70s cinema.

Julia Wrigley, Head of Film4 Channel, said today: “We are delighted to extend our headline sponsorship of Film4 FrightFest to a record 6th year, as the festival continues to evolve in an exciting fashion. We are thrilled by the incredibly strong presence of British films in this year’s line up, including the artfully sinister Film4 Production, Berberian Sound Studio. Our FrightFest season on the channel also goes from strength to strength, like the Festival itself.

So if you are all good boys and girls, and don’t get too scared, we will bring you as much coverage as possible and may even speak to some pretty interesting and SHOCKING people along the way!

For times, full info and to book tickets, please check the FrightFest site.

For a unique FrightFest 2012 competition, to win a signed programme from the Festival, click here

Watch The Arrival of Wang, directed by The Manetti Bros. on FRR, days after it’s Festival showing, here

Interview with Claudia Gerini from Tulpa

Keeps your eyes and ears, blood and guts open for our coverage coming out of the woodwork!