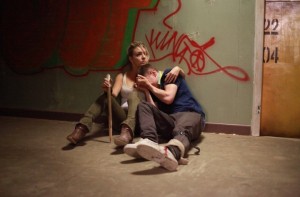 The world premiere of Tower Block was the closing film of FrightFest 2012, and starring a British cast of Sheridan Smith, Jack O’Connell, Ralph Brown and Russell Tovey, I was pretty excited about this new thriller (because it was never going to be a horror in any form). Directed by James Nunn and Ronnie Thompson (the pair’s debut feature in the director’s seats) and written by James Moran (FrightFest favourite, Cockneys vs Zombies, Torchwood, Severance) Tower Block tells the story of one floor of people in an old council block, about to be demolished, and the terror they have to go through when an unknown gunman starts to kill them one by one.

The film starts with an attack on a youth happening along the corridor, in a stylish sequence, each of the people in their flats deadbolt their doors and turn of their lights (in all honesty, that is where the style ends in this film) and one assumes that there is going to be some sort of social commentary throughout the film about youths, council estates, the abject terror that the Daily Mail believes we are all in etc etc… You catch my drift. Smith’s character, Becky, decides to intervene and help out the boy before getting battered and bruised herself – and so here is where Tower Block starts. Once the credits were through, we are then introduced to each of the people living on the oak floor, they range from an elderly couple, a ‘normal’ family, a rowing young couple, single men and women, drug sellers and the token chav mother with young children – I can already tell you that I was not particularly enthused with much optimism for this film as Moran had managed to fulfil just about every stereotype you could get in a film with this location. The only one missing was the depressed alcoholic… and then one enters in the form of Tovey, who plays Paul.

The audience is told that the block is due to be demolished as soon as the council finds somewhere for this floor of people to live (wow, maybe a 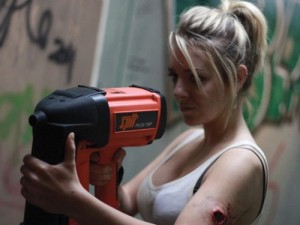 unique comment about social housing?) but then the chav jokes kick in – and we see the mother screaming at her children (in an attempt to make a joke for the audience). Things turn suspicious when the one of the council members suggests ‘removing’ the tenants in anyway possible, perhaps this film was going to get interesting and turn into some sort of psychological thriller about getting them out? Alas, I was wrong and the chav jokes continued. We see the actions of some of the tenants, O’Connell, best known for playing Cook in series 3 & 4 of Skins (the reason I stopped watching the show), was the rough hooligan of the block, charging the floor for ‘protection’ but actually it was just so that he doesn’t attack them himself.

Paul enters the scene, an unhappy man who has little dialogue, little engagement with the audience and simply moans about having no one else – this was possibly the worst role I have ever seen Tovey play because I cared very little about whether he lived or died. The film’s main story starts the next morning, once Becky has finished with her one night stand and his face is blown off through the window – this is the first and only gripping, jumpy scene in the entire film which makes you want to know what is happening. Bullets then flood the windows of all the flats, some people die, some don’t (and most the ones that don’t, made me wish they had). They escape into the hallway, are forced to get on, and try to hatch a plan to escape – I am sure you can picture the scenario now. They argue, they disagree, some more die etc etc…

Acting wise, the film’s three leads, Smith, Tovey and O’Connell had very few moments were they were interesting or worth watching, and most the time that has more to do with the film’s sparse and boring script. Sure, it’s filled with chav jokes, the audience take a moment when characters they start to know die but all in all, I learnt nothing, I cared little and I saw no point. Smith in particular, has it lucky, she plays a no bullshit sort of gal who takes control of the situation, but mixed with the script was her interpretation of a chav gone good and it ended up looking like cardboard. O’Connell does very little for me on screen, I understand that since Skins, he has gone on to do other films and television and many people enjoy watching him but I find him unreasonably angry throughout everything I have seen him in (inc. Tower Block), unfortunately becoming typecast due to Cook. He has one facial expression throughout the entire film, and although much of his character is played for laughs (I am sure to give him appeal and make him seem less threatening), I was felt the character was flat and repetitive. 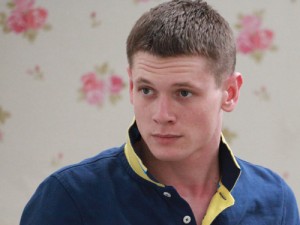 There seems to be a new wave of British cinema going around in the past few years – in the 90s we had the Guy Ritchie cycle of postmodern ‘lads’ gangster movies but we appeared to have moved straight into the council estate in British cinema, particularly with films like Kidulthood, Adulthood & Attack The Block. Now I am in no way taking away from the accolades these films may have garnered, but it seems that if something is trending, everyone has to have a go and Tower Block just didn’t pass for me. It didn’t feel fresh or interesting (and even the name has confused many with Attack The Block).

Unusually, for all my complaints about the film, it did do lighting quite well, especially as most of the film is quite dark. The star lighting (albeit used unemotionally, and for the wrong actress) followed Becky around like a dog on heat, and it was very clear that the filmmakers were making a film with her at the centre, it was a little heavy handed but still better than most of the film. The other interesting thing about Tower Block was the narrative (forgetting the chavs and the stereotypes) but the actual unknown killer element of the film – it was a new version of the ‘locked in’ murder mystery (seen in the work of Agatha Christie for example) where we watch the characters in a confined area try to outwit an unknown assailant. This kept the film moving until the twist ending (which I won’t ruin for you) but it was ultimately the main bum note of the entire film – it was flat, unexciting and ultimately pointless.

I do try my hardest to be fair when writing reviews, but as I was watching this film I found myself both angry and bored, and therefore this was the review that I had to write. I don’t recommend Tower Block, because I don’t think it did anything important or interesting. It wasn’t a badly mad film (hence the 1.5 rating), but it wasn’t worth commenting upon further.