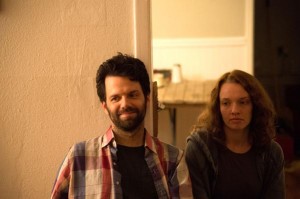 What happens to the survivor after the killings? Well that is what Benjamin R. Moody’s Last Girl Standing aims to try and explore through the eyes of Camryn (Akasha Villalobos), the one who got away. Moody’s low budget horror is really a kind of fresh air in amongst all the genre films that are coming out week after week; this one sets out to explore the psychology of its lead character first and the slasher element second rather than the other way around.

The film begins with a group of friends, in the woods being massacred (a trope that most fans of the genre will be aware of) and the one girl gets away and survives. She kills the masked monster but that really isn’t ever enough. This opening is just a taste for what is about to come because the act of the murders isn’t what makes the film spin but actually the carnage that that survivor, Camryn has left to deal with. Last Girl Standing is much more interested in paranoia, guilt and loneliness – whilst the monsters loom large, the biggest villain of the story is what is going on inside of her head and what she has had to give up to try and continue a ‘normal’ life. The opening credits suggest that the murders received a lot of press, people followed Camryn and all she wanted to do is disappear.

The film picks up a number of years later and Camryn is living alone. She spends her days working at the local dry cleaners, comes home, has a microwave dinner and falls asleep in front of the television. She has no friends, no one to speak to and nothing to say. What kind of life is that? But her suffering doesn’t stop when she goes to sleep – her dreams are nightmares replaying the night that changed everything over and over again, could she have done something different to save any of her friends? One day, Nick (Brian Villalobos), a handsome young guy starts to work at the dry cleaners. He takes an instant shine (no pun intended) to Camryn and the audience are forced to question why… does he have something to hide? Initially, she starts to line Nick up with the killer and she becomes uncomfortable, not wanting to spend any time with him. But one night when she is working late and alone, she has a breakdown of some kind and believes the killer is back to get her. She passes out in the shop and is saved by Nick who has come back to get his phone. He takes her back to his house to make sure she is safe and feeling better and he tries to integrate her with his friends. For the first time in years people are interested in Camryn and don’t know about her past – perhaps things could look up from here? 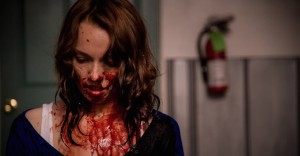 his friends. She follows them, obsessed with their safety and starts to see things like blood on trees and hooded men in bars with knives. No one is quite sure what to make of this mysterious and clearly disturbed woman. This builds up to the thrilling and blood thirsty climax of the film; the damage of the past is too much to bear and this erupts in an unexpected way.

Last Girl Standing is a provocative type of horror film, whereas Scream wanted to parody the tropes so often connected with horror, Moody’s film is much more interested in confronting what audiences have come to expect from the genre and give them life, confront them and see where that takes the audience. Both Akasha and Brian Villalobos are fantastic on screen, they represent the light and darkness of the story and their chemistry is both touching and exciting. Brian’s character, Nick really brings Camryn (Akasha) out of her shell as the film goes on and even gives her hope for the future.

A highly recommend and exciting kind of horror film, proving it doesn’t always have to hypes and scares all the way but instead something exploratory and subtle, Last Girl Standing is a lot of fun indeed and marks Moody as a filmmaker to watch out for.

Last Girl Standing will be playing Film4 FrightFest on August 31st at 3pm.