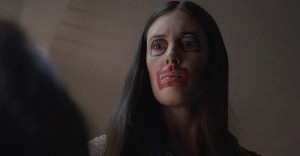 Ben Cresciman’s Sun Choke may be the closest that anyone has come to an homage of David Lynch’s extraordinary Mulholland Dr. without any pretension and without showing off that he knows how to make a film. Whilst it most certainly is not for everyone (as with Lynch’s work), Sun Choke is a colossal film in many respects; it’s stunningly filmed, unfolding at a pace that grips the audience, never letting go, exploring the psychological recesses of the darkest parts of the mind (think The Shining) and features a powerful central performance from Sarah Hagan (best known from Season 7 of Buffy The Vampire Slayer) as Janie.

The majority of what goes on in Sun Choke is never explained, but by the end, the audience learns that they really don’t need an explanation of the events. Rather one is meant to give themselves over to Cresciman’s story – simply believe everything that is on screen and don’t try and make it fit with what came before and what is coming afterwards. In that moment the audience are simply believing and that is the key to Sun Choke.

Janie (Hagen) lives in a beautiful house in the middle of the Hollywood Hills (even down to location, Sun Choke is similar to the world of Mulholland Dr.) but for some reason she is kept as some kind of prisoner in the house. She lives with another woman, Irma (Barbara Crampton who gives a subtle and chilling performance) who acts as her parents, carer, doctor and often punisher but everything that Irma does, is meant to be for Janie’s good. Janie often is docile and quiet but this adds to her mystery; the audience is never quite sure what she is thinking and Hagan does an extraordinary job carefully creeping along the screen. She has a routine that she must stick to in order to remain calm and collected but every so often, flashbacks that allude to some kind of sexual crime break can solitude of Janie’s world and she breaks down.

One day Irma says that Janie can go outside alone as she feels that she has gotten to a point where she can look after herself. Without reasoning it with the audience, she finds herself becoming dangerously obsessed with Savannah (Sara Malakul Lane), a woman she has seen around town – she follows her and even breaks into her apartment to learn about this new woman. She feels ultimately connected in some integral way. But as the film goes on, the calmness soon erodes and violence erupts from all corners. Irma towards Janie, Janie towards anyone that talks to her and soon a gripping and evocative climax between Savannah and Janie in the house where this all began.

The chemistry on screen is striking and vital but it mainly centres around the power of Hagan because she reacts to her co-stars in different ways; her

relationship with Crampton is frightening and often unexplainable. The audience are left wondering why these two women have been allowed to live like this and what forces have driven them together. Hagan speaks to the audience and to her co-stars with her eyes, she is able to pull together many different emotions by her stare. But when Hagan is onscreen with Lane, it’s quite electrifying. There is a sense of eroticism, something not really explored but cannot be ignored. The power of these two women to command the audience watching illustrates the skill of their performances.

What makes Sun Choke stand out from other psychological films, from other horror film is that the vast majority of the film takes place during the day. The light from the sun beams across the screen and often swallows up the characters and action. There is little darkness on screen and this makes for an interesting juxtaposition between the drama of the action and their physical surroundings. This is also the same for the house that Janie lives in, it is virtually completely white – there is a brutality in the characters that is mirrored in the rooms, which causes a kind of beautiful alienation for everyone in the film.

One of the best psychological thrillers of the year, Sun Choke will be right for fans of directors like Lynch and Kubrick – it’s evocative, often meaningful and pulls people in, in a way that the audience do care about the eventual outcome.