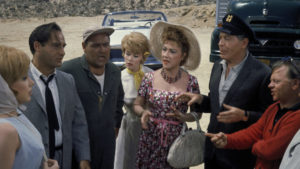 Seeing as the Christmas season is upon us, we have decided to look at 10 great gifts for film fans. Number 10 : Best for the Family! The caper classic, about a group of people lusting over a stash of cash buried under an X, returns in glorious Blu Ray for you to snap up over Xmas! Smiler Grogan (Jimmy Durante) is a robber and wanted by the police. He is also a reckless driver and crashes into a valley on a desert road. Five motorists witness is, they are Melville Crump (Sid Ceaser) a gentle dentist, Lonnie Pike (Jonathan Winters)a removal man, Ding Bell (Mickley Rooney what a name, what a man) on his way to Vega with beastie Benjy Benjamin (Buddy Hackett) and J Russell Finch (Milton Berle) a businessman. Going to his aid, Grogan tell s them a story about a wad of cash hidden under a big W. As he breathes his last, all present get an idea. But will they get to it? And will they spilt it? 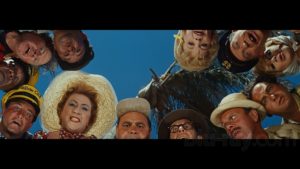 It’s a Mad, Mad, Mad (you get it and the less I write it, the more trees saved!) is a comedy of the screwball variety. It might be unexpected from its various parts but it’s right up there. Even with an ensemble cast, filled with vicarious talent (including Spencer Tracy, Phil Silvers and Peter Falk), a serious film director (in Stanley Kramer no less.) And a high end production feel in Panavision film stock. So you get humour, shades of which can be droll, pointed and sardonic. You get Over The Top everything. From absurd situations to even more absurd characters.

Remember though this was made in the 6 years after Around the World in 80 Days! Maybe director Kramer felt this was his only way to get award recognition for himself?! I doubt it. However this argument still prevails, the plot is so 1 dimensional that Kramer must have intentionally been trying to achieve something else. Who know. Maybe it’s very nearly the ultimate comedy film. 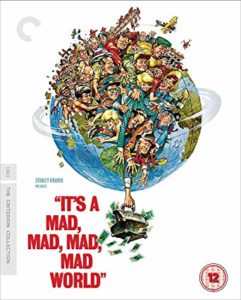