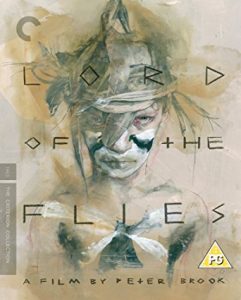 From the darkness of the island undergrowth to the human animal, Goldman’s noble prise winner convents as equally an explosive work onscreen. The threat of nuclear war has moved from distant nightmare to fully fledged reality. Children are packed up.and shipped off to safer shores. One of these planes crash lands in the Pacific. All adults on-board are killed. Ralph has survived. He awakens on the island. While wondering he meets Piggy. They form a pack. Then still more appear. Some are from the choir. Others are small children without any fear. The children have survived and the island will become the unmaking of them. Ralph is elected leader but will he be able keep peace…

Often held adage is that ‘its nit as good as the book.’ With Lord of the Flies it doesn’t hold up. The nobel prize winner would take a whole lot of out doing but what is achieved by Peter Brook, his crew and their child cast is phenomenal. The human animal is thrust into the centre with a wonderfully restrained film. Simple, documentary style approach captures the power balances and shifting dynamics between the leaders. The use of dark, smoke and surf mix together to unravel the humanity of the children. That wonderful soundscape, stripped down and heightened creates the claustrophobic dream of the island. Influences can be felt far and wide. Battle Royale, Hunger games and even every zombie film ever lifts from this text.

4K restored transfer means ‘Utterly amazing cinema quality transfer’. It shows in three key scenes. The white beach feel oppressive instead of obtuse, the rock face is pock marked adding little elements of undulation and fragmentation. That hunt scene is extraordinary. A jungle as menacing as it appears in print. There is much goodness throughout the extras but the essay is my preferred port of call. MacNab prose is sharp but his style captures the films schemata. This is so good that I felt it was worthy of republishing. The fact he mentions my favourite film HUE AND CRY as a counterpoint just makes it even more worthy of your time and money. 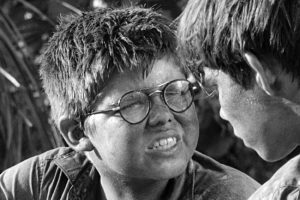 Audio recordings of William Golding reading from his novel Lord of the Flies, accompanied by the corresponding scenes from the film

Deleted scene, with optional commentary and reading by Golding

Interview with Brook from 2008

Something Queer in the Warehouse, a piece composed of never-before-seen footage shot by the boy actors during production, with new voice-over by Tom Gaman, who played Simon

PLUS: A booklet featuring an essay by film critic Geoffrey Macnab and an excerpt from Brook’s book The Shifting Point 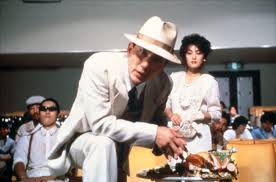 A genre bending film which might feel like an anthology by way of a dream, inside all taking place inside a restaurant.  Two truck drivers, Gorō and Gun, want to eat some lovely ramen noodles. Their hunger has enveloped everything and they just cant stop thinking about the perfect noodle. So when they see a shop on the corner and get out, expectation is very high. Gorō however has to rescue a boy being beaten up by three other boys. They are wailing on him because of his circumstance. The boy is named Tabo. He is the son of the owner of the restaurant called Lai Lai, she is called Tampopo. She is widowed and had to take on the struggling business. As they sit there eating a customer called Pisken harasses Tampopo about the food and its quality. Gorō invites him and his men to step outside to discuss this with fist’s. Gorō is outnumbered by Piskens men and is knocked out. Waking up the next morning he decides to reverse Tampopo’s fortunes and find the perfect noodle.

Tampopo works on the senses in a variety of ways. It is to put simply ‘unique’. Like the food which features, it is a series of thematic send ups. Taking genre and each time, re serving it as a new and diverse take on the original dish. Food as discipline like martial art film, food as spiritual guide like spirit quest film and food as comedic device akin to satire. From its start everything is eschewed. Genre becomes mixed motifs. A ‘Ramen’ Western it might say on the package, but this is one film which often defies simple description. 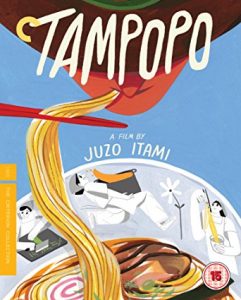 The disc is a collection of stunning pieces collected for a wonderful panorama on the film. The 90 minute making off, delights the palette. Itami voices the films satirical absurdity and culinary magic. The interviews with all and sundry scholar and stylist, exert the pull of ideas in the film. From food as universal language, sexual device, sensual delight and even as hypnotic tool. The real stand out piece for fans however is Itami’s debut short film. It uncovers themes he would later have central to Tampopo. 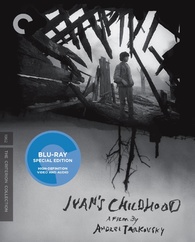 The Second war left deep scars on society. Not only in Germany, Britain and America (as is often the narrative) but other lands devastated by war. Russia suffered a psychological fracture which even today has left a hangover. In Ivans Childhood we witness the war from the eyes of a child. Ivan Bondarev is a 12-year-old boy who has lost his family, his home and his childhood. Navigating the barren lands of Southern Russia, Ivan has been fighting the advancing Nazi army and their scorched earth policy. He returns to the army centre nearest him. Addressing the officer in charge, he informs him that he needs him to call “Number 51 at Headquarters”. The officer seems perplexed, how can a child be a solider but as reality dawns, it appears the truth is darker than fiction.

Many of those watching would have known the war, known the devastation and despair. The war sat on the shoulders of everyone living and dead. It was how life had directed everyone. It was also what had brought new and more intimate nightmares than imagined before. Tarkovsky used visual dexterity to narrate the world of war and fragile peace. He casts a deep and complex series of ideas within the frame. Holding the space to task and encountering ideas about personal trauma, triumph and identity within some very spectacular visual hues. Reaching its zenith with the scene in the bunker. Ivans Childhood is not his most matured work and yes it is true that his later works have more time spent on thematic translation but it is a well. Overflowing with emotion and resonance. 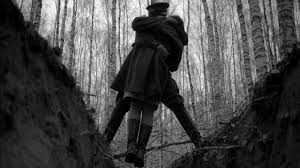 To the disc and you might be forgiven for expecting more. What you get however is extraordinary. The transfer is an age above its Artificial eye release. This is seen in the wood sequence, where the tress can be picked out individually. The richness of the blacks and whites stop fuzz and you never has a pixel or blur in any of the bunker scenes. Johnson makes the appreciation feel like a lovers analysis of its betrothed. However it is rich enough to value and the talk of the great mans ideas on the film are delightfully rewarding. My real love was the interviews. Vadim explores the film and its grand translation to Blu Ray but comes alive when he details the woods and the trees. This is cinema as a visual art bar none.

2 NIGHT OF THE LIVING DEAD

A revolution is not televised, oh no it is screened late at night in drive ins around the country. This zombie vs human classic took a worn and tired series of ideas and extrapolated genius. Barbra and Johnny Blair are visiting their fathers grave in rural Pennsylvania. A man suddenly attacks  Barbra and kills Johnny. Barbra flees to her car but is unable to escape the chasing mad man. She finally finds a house nearby as refuge. Inside is no one. Upstairs, the rotting corpse of a woman half eaten lays. This drives her outside and into the arms of Ben. Ben has fled from a nearby town and has resorted to driving the “monsters” away. Then run inside and barricading the houses entry points. Door, Windows and storm drains. Ben  Searches for food and news of what is happening. Finding a radio and a rifle, he is convinced this should resolve itself. However as they turn the radio on…the news appears devastating. 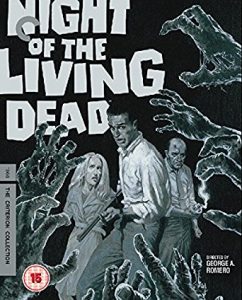 Much can be said abut the power of certain films.The power to scare. The power to inspire. The power to influence. Bar Psycho and maybe something by Griffith, NIGHT OF THE LIVING DEAD is a film that launched a million cinematic versions. From the cheapo B Movie classics of the period, to the Italian films that came in the 70s, the 80s shock and gore fests and even the handheld, indie features of today. Its not hard to see why. Well directed, written with economy, good cast and ideas executed with a sense of seriousness and subversion. It is a film that makes you think, feel and in equal parts, be entertained.

The disc is a study in how to do a restoration right. The transfer is sublime. Just watch that VHS, DVD or even those Blu ray version and cry at the night time clarity or that basement dank. Night of Anubis is a treat for film fans and editing aficionados. It might seem a little clunky and have a heavy 3rd act but it made the film what it is. The real gem on here is that feature where the good and the great talk about how the film inspired them. From Darabont however is my standout special. His love is infused into his films and his nods to the work are more telling now. Check out his THE MIST after he talks about the film to see what I mean!

THE NUMBER ONE FILM RELEASED BY CRITERION IS 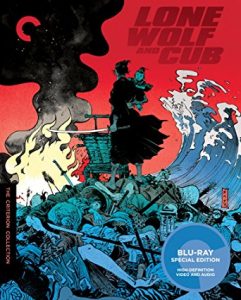 A lot can be said for Japanese exploitation cinema. From the mid 60s until the end of the 90s a whole sway of delightful pieces came out. Lone Wolf and Cub stands out from this. One because it is a higher value series of productions, Two it is jidaigeki film in everything but name and three it lives according to a series of excellent Mangas. When Itto Ogami (Tomisaburo Wakayama) is betrayed,he has to rebuild his life as an assassin—alongside him is his son Daigoro (Akihiro Tomikawa).  Once the shogun’s executioner, now with a bounty on his head after the evil Yagyu clan set about framing his. He gains and grants revenge across Japan. All in order to grant vengeance for his slain wife and the restoration of his honour. 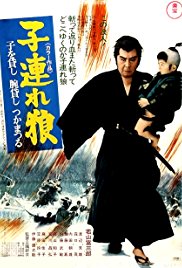 The discs are the real key to why you want to part with your hard earned cash and as to why this is my favourite release so far from the brilliant Criterion Collection. Yes we have had the whole collection before. Eureka for one released a complete collection. Looked okay, box was lovely. This looks staggering. No compression, clean crisp visuals, blacks are deep jet black. That famous snow scene is white and red. Like a painting. A magic painting of light and colour. Damn its a thing to see. Sound like a dream from which the original DVD sounded like a whack from a bass guitar and a drum. 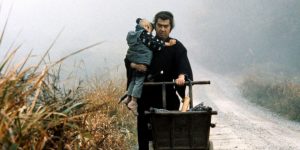 The other 3 best features are

Lame d’un Pere, l’ame d’un sabre – A superb documentary about the film and its legacy. How it was translated and whats more, the power of manga and cinema to cross cultural zones.

New interview with Kazuo Koike – Funny, clever and a little bit like that uncle you wished you had. Kazuo reveals much and relates the novels ambitions in a well placed interview.

Silent documentary from 1937 about the making of samurai swords – This is an exceptional piece and one that should not be missed.