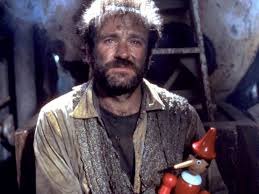 When THE FISHER KING first came out on VHS, I was sold. Being a major fan of Terry Gilliam, I was sold. What we got was a Hollywood film and not as much a Gilliam film. Shock Jock Jack Lucas (Jeff Bridges) declares that ‘Yuppies are vermin’ on air. A maniac shots dead a group of them in a bar. Lucas falls into a drunken despair after being the target of blamed for the slayings. Two years later, when he rescued by a homeless man called Parry (Robin Williams), after being attacked by a vigilante gang, Jack awakes still in despair. On finding out that Parry lost his wife in the slayings, he sees a chance for redemption. 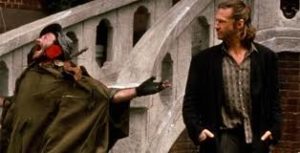 On watching it some 20 years later, this film hasn’t only improved in my estimation but it is all about the chemistry between Williams and Bridges. This is a film that deserves their praise and recognition of their talents. Both play fragile men, who are coming to terms with losing what defined them. Williams is extrovert and vulnerable. Bridges is gruff but graceful. Gilliam intersperses this relationship with humour, visual nuances and a genuine eye for the magic of classic Hollywood. 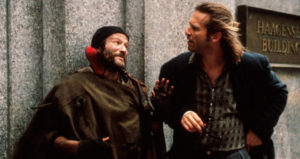 What have Criterion done in this release to make you part with your dough? Well the 2K Blu Ray transfer seemingly has a slight colour issue (cold white light). Some of the smoky interiors are cleaned up and you can see a depth of field which was missing in the previous viewing. My problem is I only saw VHS. The 5.1 surround transfer is joyful. The music and audio stands out and Gilliam focuses on a lot of this. 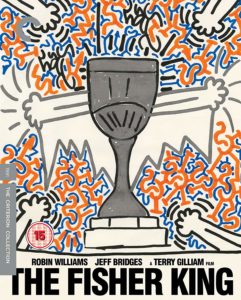 So it plays to him. The Audio commentary is very old, quite good but wished they had pulled in a new recording. Gilliam is a great listen but if you have heard it before, then you will know its details are from a pre 9/11 eye. The interview are brilliant. Gilliam, Plummer and Ruehl are the best in the terms of the content about the films making. Obst reveals much more about the films creation and working with such a collection of talent. The top three features however are – 1) Footage from 1991 of Bridges training. This is so much fun. Jeff commits and it uncovers how an actor makes a film role their own. 2) Essay by critic Bilge Ebiri. Ebiri writes with an engaging tone. Making the essay focus on how the film still is relevant today, a modern fable and a retelling. 3) Interview from 2006 with actor Robin Williams Love Williams. Love the interview.