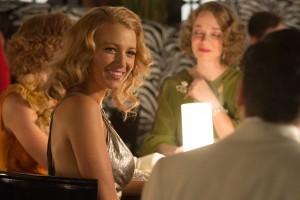 Audiences have gotten used to a Woody Allen film a year in recent times – some are misses and some are slightly less misses with the last proper hit being 2013’s Blue Jasmine as well as 2013’s Fading Gigolo from John Turturro starring Allen, which felt like an old school Woody film and was another welcome addition to his filmography. His Amazon series, Crisis in Six Scenes starring Miley Cyrus appears to have gone down like a led balloon (even though this writer quite liked it and found it an improvement over recent efforts) and so does anyone really have any expectations anymore when it comes to a new film?

Cafe Society has (once again) a fantastic all-star cast including Steve Carell, Jesse Eisenberg, Kristen Stewart, Blake Lively and Corey Stoll to name a few. Set in Hollywood in the 1930s, Carell plays Phil Stern, a hot shot agent who’s nephew, Bobby (Eisenberg) has come from New York looking for work. On the pair meeting, Stern asks his secretary, Vonnie (Stewart) to hang out with Bobby and show him around. The pair instantly grow fond of one another and bond over their ability to see the vapidness of the world around them. When Bobby tells Vonnie how he feels about her, she explains that she already has a boyfriend – a journalist who is travelling at the moment but quickly the truth comes out, that she has been having an affair with Stern the whole time. Now Vonnie must choose between the two men; two generations and two different outlooks on life.

There are also multiple sub-stories going on at the same time, mostly around Bobby’s brother Ben (Stoll) who has criminal connections and is very good at making people ‘disappear’ as well as Bobby’s employ at a nightclub that Ben opens. Bobby also has a relationship with another woman, Veronica (Lively), which could be the real thing but Cafe Society is much more interested in the Bobby, Phil, Vonnie love triangle.

So Bobby and Vonnie’s relationship is based on their own ironic love for Hollywood – they both live there, want to 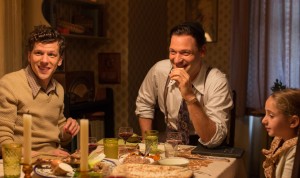 start careers there and yet they believe they are truly beyond all that Hollywood ‘fluff’. Sadly Cafe Society is exactly that – it’s surface, filled with lots of smiles and no depth. The pacing is choppy and the story simply expects the audience to go with it – jumping from one incident to another evening, following these characters who have little development and even worse, no chemistry. Allen has tried to create a film that crosses genre; comedy, romance and drama and yet there is probably one funny scene (a very well done scene between Bobby and a call girl early in the film) and the rest relies on melodrama and not even particularly engrossing melodrama at that. It’s difficult to understand how quickly Vonnie falls for Bobby having found out that she can no longer have his uncle.

But it does looks lovely; location, costumes, props – the whole shebang looks fabulous and glamourous and once more ticks the whole ‘isn’t the surface lovely’ feel of the production although there is also a peculiar yellow hue that makes the entire cast look a little like they have some internal organ failure (but you know, they all drunk a lot so perhaps that was the point?).

Sadly Cafe Society was just a bit boring – especially once Bobby returns to New York for the second half of the film. We see several scenes at the nightclub over and over, we get the point pretty quickly that Bobby is finding work that is good and stable for him and yet there is something missing. It could have been so much better, it really should have been but alas it was not to be.