Hal Ashby’s Harold and Maude is a wonder, something so surprising, charming and intelligent that it seems wrong to not watch it. This classic tale follows the emotional and fantastical relationship between the young and wealthy Harold (Bud Cort) who seems to have some morbid fascination with death and the much older, lively and loving, Maude (Ruth Gordon), who frankly doesn’t give a flying fuck.

Whilst Harold moves through his days, appearing to try and adhere to social norms that are forced upon him by his family and those around him, ultimately he understands that he will will never quite fit in within this crowd and so as a way to make the days pass by easily, he mocks up suicides that he reenacts with his fiery imagination and humorous fervour. From hanging himself in the living room, to shooting himself in the mouth and slashing his wrists in the bathroom – these scenes would often throw mad panic around and in cinema today, would often be frowned upon for looking at these for laughs, but in Ashby’s own delicate filmmaking, these scenes strike the perfect balance between shockingly funny, in a satirical kind of way, and horrendously sad to see that this young man is in fact too overwhelmed with life.

One day, Harold is at a funeral and catches the eye of the elderly Maude who seems to be standing in the corner finding the whole ordeal rather funny. 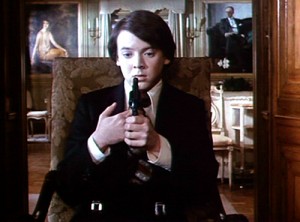 Harold is dressed in his black mourning clothes as if he is part of the congregation but Maude has no intention of fitting in, even here. Dressed in her day-to-day clothes, she watches on and seems to grow peaceful with a sense of fulfilment. Later on, when in church, Maude approaches Harold and suggests they get to know one another. She sees something in him that she likes, and at the age of 79, why the hell shouldn’t she just say as she feels? At first Harold is unsure but later realises that he has met someone else that is just like him.

Their relationship is constantly and cleverly juxtaposed with that of Harold and his mother (Vivian Pickles), who is trying to set him up on a variety of blind dates but none of them seem ready enough for Harold’s slightly mad ways. Interspersed with the odd occasional visit to the psychiatrist, Harold seems to have made his mind up about life and isn’t willing to give any other way a shot. He spends more and more time with Maude, who opens his mind up to the world and soon the pair start not just an emotional relationship but a physical one – thought through and filmed beautifully by Ashby who clearly understands the delicateness of human emotion and how to best portray that on the big screen.

Both performances from Cort and Gordon are extraordinary; their chemistry is better than most love stories between similar ages today and each plays enthusiastically off of the other in a way that makes Harold and Maude a wonderful love story alongside all the clever stuff. A film that does nothing but cause that butterfly feeling in the stomach of its audience because they know they are watching some really special.