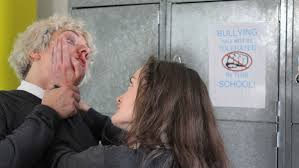 An incomprehensible flurry of schoolgirls giving each other bloody noses, 7.2 is a bit of a mess.  This short by Nida Manzoor is part computer-game action drama (complete with heavy yellowish tinting and exaggerated ‘thwump’ noises), part CBBC-style TV programme, and has a bit of St Trinian’s thrown in for good measure.  It feels as though it’s not really sure what it wants to be.  As far as can be followed, a schoolgirl wakes up with severe memory loss, whilst pigtailed bullies tower over her bleating threats.  She then runs all over the school in a panic trying to accomplish some mission before time runs out – as indicated by inexplicable ticking digital clock interims.  The school morphs into a war zone of teachers to duck, forbidden boys’ quarters to break into and awkwardly choreographed fights to be won.  When her accomplice aka best chum gets bound and gagged with a school tie we can’t help but feel we are just watching a bunch of kids playing.  However, there’s a sense of a potentially good idea not quite coming into fruition, and, with the annoying characters and lack of clarity, overall the story unfortunately fails to charm.