Manchester-by-the-Sea opens with a series of beautiful shots of a peaceful seaside town. We soon meet Lee (Casey Affleck), who works as a maintenance man in Boston, responsible for the upkeep of several buildings, and lives alone in a small apartment. Director Kenneth Lonergan’s camera takes us through some of Lee’s daily routines, and wonderfully evokes the awkward humour of day-to-day life. In the opening minutes, the audience already receives a sense of comfort and understanding of Lee’s life. Lonergan makes the audience relate to Lee quickly and effectively, which makes what happens in the rest of the film all the more powerful.

Lee receives news that his brother Joe (Kyle Chandler) has died, and travels back to his hometown of Manchester-by-the-Sea to take care of funeral preparations. When Lee discovers that he is left as the guardian of his brother’s 16-year-old son Patrick (Lucas Hedges), his past demons return to haunt him more than ever before, as he struggles to deal with the devastating weight of his past. 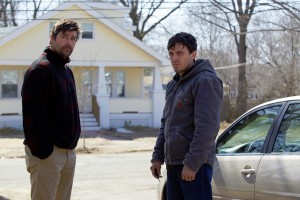 What is so impressive about Manchester-by-the-Sea is not the story itself – a man coming to terms with a difficult past is not exactly groundbreaking – but how Lonergan’s script deals with and subverts expectations. The film delicately balances the past with the present, and at first it is easy to mistake the two. Soon enough, the subtle distinctions between past and present are clear, and the initial confusion actually works to understand Lee’s motivations better. Clearly, Lee is a man stifled by the past, and working to slightly confuse the audience of the films timeline illustrates this well.

There a few key scenes involving Lee and his ex-wife Randi (Michelle Williams) that work in such subtle, surprising and unique ways that they stand out as some of the finest moments in film this year. One particular moment at a funeral is tremendous, and only serves to prove Lonergan’s knack for evoking emotion in unconventional, yet supremely effective ways. The final scene between the two actors is utterly heart-rending, and much of this is thanks to their incredible performances. Affleck in particular delivers his career-best, with a harrowing and often tremendously subtle performance that feels so real and fully realized that it will surely land him an Oscar nomination, and what would be a well deserved victory. Williams is also tremendous, and a likely Oscar favourite as well. Together, their chemistry is so immense that it really does feel as if they have spent a life together, and in conjunction with Lonergan’s script, their brief moments together are absolutely extraordinary.

In fact, the entire cast is excellent. In addition to outstanding work from Affleck and Williams, Kyle Chandler shines as Lee’s deceased brother. Thanks to Lonergan’s intelligent use of flashbacks Chandler gets to shine, and the chemistry between him and Affleck is remarkable. Youngster Lucas Hedges is a breakout star as Patrick, and he delivers many of the films funniest and heartbreaking moments. 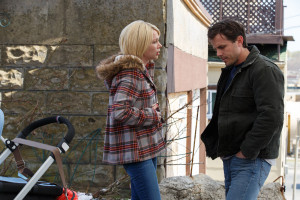 With his third film in sixteen years, Lonergan has already established himself as a filmmaker with an exceptional understanding of human emotion. This has never been more clear than in his latest effort. It is a film that feels so human, so real, and is often so painful. But what prevents it into falling into melodrama is its remarkable sense of humour. There are no ridiculous slapstick moments, but what comes through is a real sense of humanity. Much of the laughter is evoked from the film’s sharp script, which boldly avoids dramatic monologues in favour of natural, sometimes chillingly realistic conversations. Dealing with grief often takes a sense of humour, and few understand this better than Lonergan. What he may lack in visual flourish he more than makes up for in sheer emotional power, and Manchester-by-the-Sea is one for the ages.