Olivier Assayas has found his muse. After 2014’s  lovely Clouds of Sils Maria, Personal Shopper marks Assayas’ second consecutive collaboration with actress Kristen Stewart. Stewart, who rose to meteoric fame after starring in the Twilight films, garnered immense criticism for her performances in the famed franchise. Her career has undergone a sort of metamorphosis, and her performance in Sils Maria garnered worldwide critical acclaim. Their latest collaboration, then, is more than just a confirmation of Stewart’s acting chops; Personal Shopper establishes Kristen Stewart as one of her generations finest. Thankfully, the film itself is every bit as impressive as Stewart’s performance. Personal Shopper is a beguiling experience, and functions not only as a beautiful ghost story, but an incisive social commentary. 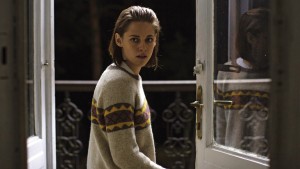 Maureen (Kristen Stewart) hates her job as a personal shopper. It pays well enough to live comfortably in Paris, but she is overwhelmed by the unsatisfying nature of her work. She remains in Paris waiting for a sign from her deceased twin brother, because of a pact that they made before his death. Until she receives a sign, her life is seemingly stuck in motion, as she carries on directionless in the busy city.

While the marketing has posited Personal Shopper as a psychological thriller, what is especially interesting is its understanding of a sort of millennial malaise that has afflicted much of today’s twenty-somethings. There is a clear divide in the expectations and realities between baby boomers and millennials, and Assayas’ film captures this eloquently. It never feels like Assayas is criticizing Maureen for detesting her well-paid job, and instead treats her with considerable empathy. The character could have easily gone a different way under a different directors’ guise, but through Assayas’ treatment Maureen is not seen as a brat. Assayas validates her convictions, and its refreshing to see to see this sort of character in a new light.

The script (written by Assayas), is beautifully layered, and makes bold and unexpected choices in what it chooses to reveal and keep hidden. Particularly impressive is that one of the most intense and lengthy sequences in the film takes place largely via text message, and it is a great credit to cinematographer Yorick Le Saux that the sequence stays enticing. In some ways, Personal Shopper feels like a traditional ghost story, but filtered through a modern, tech-heavy world. The varied use of technology as a storytelling device mimics modern filmmaking trends (last years Unfriended, for example, takes place entirely on a computer screen) and puts a new and exciting spin on the classic ghost story. 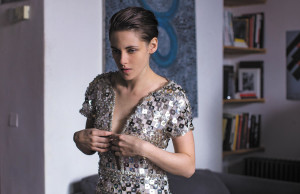 In addition to its remarkable insight of modern culture, Personal Shopper frequently delivers on its promise of thrills. This is partially thanks to Stewarts terrific performance, but even more credit is due to the sound design. By favouring a sparse, atmospheric approach to sound, the limited use of music is all the more effective. The silence feels deafening, and the tension is expertly ramped out throughout the film, and for a film far less showy than your average thriller, it’s a remarkable accomplishment that Personal Shopper is capable of keeping you on the edge of your seat.

Personal Shopper is not for everyone. Going in expecting a pure thriller would be a mistake – the film does provide scares, but provides a slower burn than the average thriller enthusiast might expect. Regardless, the film is an exceptional piece of artistry, with an astonishing turn from Kristen Stewart and magnificent direction from Olivier Assayas. The film is utterly astonishing, and completely mesmerizing. A masterpiece.