Trespass Against Us – London Film Festival 2016 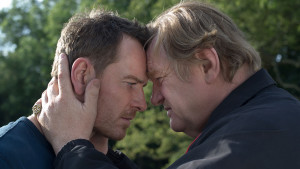 ‘Here’s the truth. You pass it down from father to son. Father. Son. Then grandson.’

Our career choice. Our personality traits. Our behavioral habits. It is often drummed into our ears in the formative years of our lives, that we can’t escape the inevitability of mirroring our parents. Certainly a belief firmly echoed by Brendan Gleeson’s criminal Colby, the philosophical and religious head of the Cutler’s, whose role here would be a fitting companion piece for his deeply troubled priest Father James from John Michael McDonagh’s Calvary. The crucial antagonist who drives and underpins the often thrilling dramatics, in this distinctive directorial feature-length debut from Adam Smith.

Jarring in the vastness of their West Country surroundings albeit confined to scrappy squalor, we are introduced to this Irish family unit in furious fashion, as Michael Fassbender’s Chad looks to shift his meandering way of living into a higher gear and tap into his unfulfilled potential. Based in a modest and murky caravan park with his feisty wife Kelly (played by Lyndsey Marshall), where a peculiar sense of community is encouraged, it’s clear from the outset Chad and Kelly’s intentions are a far cry from what his domineering father deems right.

Where they are showing great intent in encouraging their mischievous children Tyson and Mini (Georgie Smith and Kacie Anderson respectively) to embrace the high level of education on offer, which they took for granted in their youth, Colby seeks out every opportunity to twist their mindset in his justification of sticking it to the law, in order to truly succeed in life. In his sheer desperation to survive, Chad sadly succumbs to the morally questionable ways of his fiendish father, as he becomes embroiled in a high-stakes heist and tussles with the authorities (the superior sarcasm of Rory Kinnear’s P.C Lovage a worthy foil).

The early infancy of Trespass Against Us whilst providing moments in isolation that prove effective, suggest a project with a worrisome identity crisis. Leaping from the twisted humour of its wonderfully wacky creations (Sean Harris’ Gordon a notable inclusion) that wouldn’t look out of place in an oddball E4 sitcom to the blistering pace and piercing score provided by the Chemical Brothers (also scored Joe Wright’s Hanna) that encompasses its chase sequences (thrillingly shot by director Smith), worthy of a tight and taut thriller.

Yet once it fully embraces its heist drama trappings, the film settles down into a fascinating power struggle between its two esteemed leading men, as their respective loyalties to each other come under intense scrutiny. Narrow-minded and almost oblivious to the damage being done, the sheer desperation in Brendan Gleeson’s devilishly played Colby to enforce the belief that remaining frightfully tight-knit in their circumstances is a worthwhile cause, makes for consistently menacing viewing. Whilst in Chad, Michael Fassbender provides a magnetic performance as he wrestles with his inner demons, accentuated by the compelling scenes shared with Lyndsey Marshall’s Kelly and Georgie Smith’s Tyson whom are both terrific.

Brimming with personality in its aesthetic and dialogue, bringing a ramshackle charm and heart to a grounded setting that is often mocked and vilified. Trespass Against Us overcomes its flawed narrative beginnings with ease, emerging both as a superb showcase for its talented cast and a sharply observed look at the familial ties that bind us.