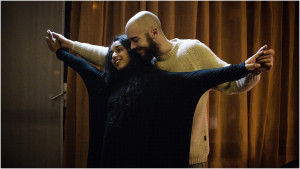 Understandably, trepidation and unease surrounds the depiction of Islam in the current climate. We are living in particularly tumultuous times. Whilst history has always found religion to be a topic that lies at the centre of war, previously there were always physical demarcated borders with which to identify the battleground.

This era is different. Traditional borders are not quite the remit of the fight. Acts of terrorism have proven that the conflict can be brought anywhere and, seemingly, at almost any time. Sadly, this has brought about a rising intolerance for differences and the right wing politic of fear is gaining traction the world over. Resentment and societal fissures are the order of the day. 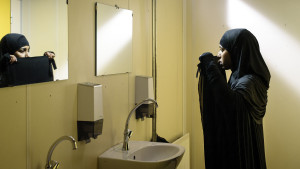 It is with this in mind that one approaches Mijke de Jong’s powerful drama Layla M. Layla is a Muslim girl brought up in urban Amsterdam. She witnesses the slurs and discrimination suffered by her faith community. Bright, sparky and sensitive, this affects her greatly, and to the point where she elects to seek solace and assurance from the more conservative interpretation of the holy texts.

This sends her on a confrontational path with both the wider liberal community and even that of her own family. These fractures only encourage her further down the path that her family obstinately refuse to accept as a valid one. Having met a boy who shares her ideals (Abdel, played by Ilias Addab), she runs off and ties the knot with him. A new dawn and a new life awaits her overseas.

Sadly for Layla, however, any early ideas that there is a paradisiacal existence awaiting her in the Middle East quickly wanes, as she comes to terms with the reality: she must play second fiddle in a culture where men and women are not treated equally. As time moves on, she becomes increasingly disillusioned by what she witnesses. Her frustrations become increasingly apparent. Her defiance grows. Is resistance futile or fortuitous? 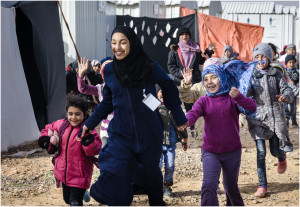 Despite being weighted with a predictable outcome signposted almost from the get-go (it is all too easy to decipher the filmmaker’s sympathies, and maybe better could have been done to showcase the seduction of the lifestyle, rather than centring it on alienation in her native Dutch community alone), the escalation of the fraught tension is palpable and the central lead performance by Nora El Koussour bubbles with a kinetic energy.

Interestingly, and perhaps deliberately, the insistent grainy sepia tinge to the cinematography offers no seesaw from country to country. The consistency asserts that Layla’s life is enveloped by an unpleasant milieu, no matter where she rests her head. Syria might not be great, but one thing is for sure, Amsterdam is no walk in the park either.

This doesn’t quite hit home with the sheer desperation of circumstance as, say, Moodysson’s Lilja 4-ever, or the thematically similar – albeit from the viewpoint of a distraught mother- La Route d’Istanbul, by Rachid Bouchareb, which surfaced at the Berlinale earlier in the year. That said, there is plenty here to appreciate and applaud. Mijke de Jong has done well to draw from a controversial well to make some that feels as urgent as it is pertinent. He may not posit any answers, but he has provided something for us all to mull over.