Love Is In The Air Review
Home
Reviews

Love Is In The Air Review 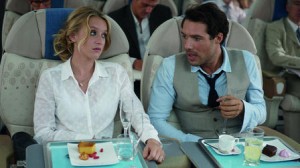 The cotton coloured Love Is In The Air is a sexy, funny and honest look at relationships through the eyes of Julie (the beautiful Ludivine Sagnier) and Antoine (the rather dashing Nicolas Bedos), a pair of ex’s who bump into each other on a long haul flight. Antoine is a womanising lawyer living in New York City and Julie is an artist; both of them are returning back to Paris for very different reasons. Julie is about to get married to a man she knows isn’t really the one in her dreams and Antoine has an interview for a job that could change his life and make him forget about the past.

When the pair find themselves sitting next to each other in the business class of their flight from NYC to Paris, they find themselves reminiscing about the good times and arguing about the bad in front of everyone else on the flight. Wonderfully told through flashbacks, Love Is In The Air, charts the relationship from start to finish before having a tight light French comedy twist at the end. 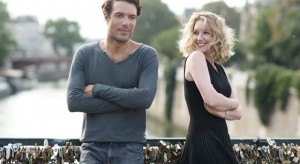 It is easy to say that Alexandre Castagnetti’s comedy won’t change the face of cinema and it won’t entice those in the audience who are expecting a heartfelt art house film but if you are happy to accept the stereotype and don’t mind the odd cliche here and there, then Love Is In The Air will certainly entertain. What is most interesting about this film is that the characters seem real and they have their own issues that they bring to the relationship much like in reality. Sagnier plays Julie beautifully by balancing the tension between hilarious girl on cloud nine alongside naivety and slightly dysfunctional making her character much more interesting than the standard comedy heroine. Whereas Bedos shows Antoine’s vulnerability when he really falls in love with the girl – it is simply something he doesn’t expect to happen and so when it does, it forces his world to spiral and he quickly loses control.

Alongside the comedic moments though, there is also an underlying sense of drama; when Julie confronts Antoine about the girls he has been chatting to on his phone, the intensity of the situation really comes through and perfectly balances out with the lighter moments of the film. This happens again when she splits up with him; both characters are emotionally devastated and the audience really feel that. But as with any French sex-comedy, it has to come to a happy ending, which of course it does but that isn’t a reason to like it any less.

Love Is In The Air is filled with laugher, a lot of fun and strikes a chord with anyone that really has fallen in love.