Sharknado 2 The Second One DVD Review 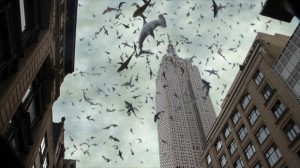 Thought of amongst the high art film class with about as much love as a breakout of head lice in a primary school, the next chapter in the Sharknado films hits home. Sharknado 2, dubbed The Second One sees the leading cast members from the first film (Ian Ziering & Tara Reid) return for another go at a hilarious extreme weather challenge. This time, newly happy couple post first near shark related death experience, are on their way to New York to help promote the book that April (Reid) has written about how to survive a Sharknado. Coming along for the ride and all round hero, Finn (Ziering) is still terrified and pretty much paranoid that something awful like that could happen again. Well, this wouldn’t be Sharknado if it didn’t and it doesn’t even wait until about seven minutes into the film. Sharks start to appear out there in the far distance between the clouds, whilst April and Finn are still on their flight into New York. Cue dramatic music, tongue in cheek special effects, heads being ripped off by sharks and some brilliant cameos – namely Kelly Osbourne as the flight attendant and Robert Hays (from Airplane!) as the Captain on board. Finn once again saves the day with an outrageous landing as he screams for the runway to be cleared.

This is just the prologue to this hilarious, witty and ironic play on the Hollywood blockbuster. Neither director, Anthony C. Ferrante nor its cast are playing around – they know they aren’t creating high art, something that screams to be remembered particularly but instead are slowly putting together a franchise, which is putting its hands up as a force to be reckoned with. Did anyone really think they would watch something that sounded like this pile of rubbish? But somehow both films have become two of the highest rated screenings ever on the Syfy network and continue to pick up a cult following along the way. In The Second One we learn more about Finn and his family, as the audience are introduced to his sister, Ellen (Kari Wuhrer) and her family. The whole gang are visiting New York and whilst there has been some form of tension in the past, this trip will hopefully be the thing that brings them back together. Skye (Vivica A. Fox) is also introduced as a second love interest for Finn, but whilst his heart truly is with April (they need a reason to bring Reid back for the next film, despite her large acting range), it turns out this kick-ass girl was his sweetheart way back when.

What more is there to say about The Second One? The sharks start coming fucking thick and fast, near enough destroying 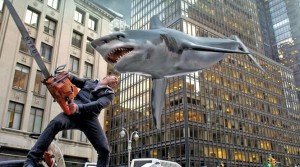 everything in their wake. There is blood, more bad special effects, lots of running, screaming and some great chainsaw action.To even have the gumption to have made the first film was insane enough but the fact that a second was made and a third is on its way proves there is an interested audience for these sorts of films – if anything, The Second One along with the whole franchise is in complete homage to b-movies, which are celebrated and enjoyed today from the 70s and 80s. Also, what could be more enjoyable than watching Tara Reid for an hour and half making the exact the same facial expression whatever is happening in the scene? Be it drama, sadness or hilarity, she always manages to create a face of distress like there is some other form of emotion in there raring to come out but she just can’t move her mouth enough.

What makes Sharknado even more brilliant is the fact that the actors look like they are enjoying themselves; that is the biggest part really. If they wanted to take this seriously, they probably wouldn’t be doing it. But they are throwing themselves literally into this storm and having a great time – or at least that is the impression they give and that is as good as anything. Throwing Skye into the mix this time around is interesting and Fox has great chemistry with Ziering but alas it is not to be (probably a reason not to have her back in the third film) and that is fine because in this world, he is meant to be with April and that makes complete sense (this is also the world where Reid’s character has written a book and is be interviewed on TV for it). There is a great host of further cameos including Andy Dick, Perez Hilton, Kelly Ripa and Michael Strahan, which all add just that little bit more laugh but makes this film a bit of a postmodernist’s dream.

Don’t expect it to change the world and it won’t of you but Sharknado is as good as any movie that you want to spend a brainless afternoon watching – fun and simple, we are waiting for the third one!