A Funny Kind of Love Review 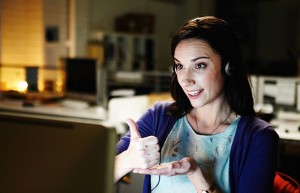 Josh Lawson’s A Funny Kind of Love (internationally known as The Little Death) is a kind of romantic comedy that no one realised they wanted. Whilst the audience are coerced into expecting a lovely little Australia lovefest, this is in fact about five very different couples and their fetishes. The only sparse connection between the stories are that some of the characters live on the same road, some know each other and most are visited by a new man who has moved into the neighbourhood, who has to tell them all he is a registered sex offender. So right from the off, the audience’s expectations are turned on their heads (perhaps internationally not so much, with the mysterious and evocative name) and instead Lawson proposes that the audience potentially laugh, sympathise, empathise and care about this group of seemingly random people.

One by one the stories are introduced, until slowly they start to cross amongst themselves. But Lawson never wants the audience to be settled, instead achieving a great feat in black comedy filmmaking. There are just as many emotional highs as lows and as the original title suggests (as well as an orgasm), some death.

Maeve (Bojana Novakovic) and her boyfriend, Paul (Lawson) start the film by discussing Maeve’s rape fantasy. Paul doesn’t really understand what he is being asked to do but soon realises that this is what she wants. She hints that perhaps he wear a mask so she doesn’t know it is him and this leaves Paul wondering whether his girlfriend wants to sleep with someone else. As the film progresses, Paul tries several times (and fails) to ‘rape’ his girlfriend. The surprise break in falls flat after he realises that she knows it is him. These moments do leave a titter and are often the strongest moments in the film as they really force the audience to question what they are laughing at. Are you a bad person for laughing at this fantasy being acted out? The end of their story cultivates in an incredible attempt in an underground car park, needless to say, Paul ends up in hospital not able to remember a thing.

Dan (Damon Herriman) and Evie (Kate Mulvany) play a couple in counselling, their sex life has gone stale and Dan has complaints. 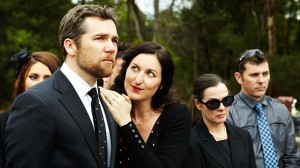 Their therapist suggests perhaps getting into role play as a way to spice up their relationship and whilst the first attempt at this succeeds, Dan quickly becomes hypnotised by the thought of becoming an actor and soon forgets about what is important and what he should be working at. As their story continues, it actually gets less funny because soon Dan becomes so consumed by his acting classes that he starts to neglect Evie, who also discovers that she is pregnant. A brilliant moment between the couple is during one of their sessions, when Dan (as doctor) and Evie (as young slutty patient) are acting out a scenario. Dan forgets completely about sex, although Evie is trying to get them back on track and in the end, he ends up prescribing her STD medication.

Phil (Alan Dukes) and Maureen (Lisa McCune), a married couple start an affair although Maureen doesn’t notice it. Maureen spends her entire time looking down on her husband. Phil has issues sleeping and finds himself falling asleep on the job, which leads him into hot water with his boss. With his job on the line and his sex life down the pan, he looks to sleeping medication. This accidentally is taken by Maureen one night and Phil learns that sleeping people is his fetish. He takes his wife up the bedroom and has sex with her. This happens night after night and Maureen has no idea why she feels satisfied in the morning. But this story is a difficult one because there really is something dark and uncomfortable about watching a desperate man having sex with his sleeping, unaware wife – is this technically rape if she isn’t consenting to it?

Rowena (Kate Box) and Richard (Patrick Brammall) are a young couple trying for a baby. They are despairing it will never happen, well Richard more than Rowena and their sex has become boring and stale. They time sex according to her cycle and she just lays there letting it happen. Neither knows what the issue is but one day, when Richard finds out his father has died, he starts to cry and oddly, this turns Rowena on. They have the best sex they have had in ages (celebrating life and all that) and she believes that if she can continue to have sex and reach incredible orgasm over and over again, they may be able to get what Richard wants. But along the way, she has to ensure that Richard has reasons to cry. She places out pictures of his dead father, loses their dog and tells him she has been diagnosed with cancer. This story is a bit more interesting than the others because there is a question asked of whether she is doing this for their sex life or to be fulfilled; are her actions purely selfish? 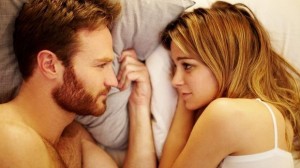 The final couple, and quite easily the most enjoyable in the whole film are Sam (T.J. Power) and Monica (Erin James), who have technically never actually met. Monica works for a call centre where deaf people video call in and translate conversations between the deaf person on the video call and they person they want to speak with on the phone. Sam calls late one night to have phone sex and what occurs is a brilliantly acted and scripted conversation between Monica and the women on the other end of the phone sex line. She is going back and forth between what Sam wants to do to this woman (and where he wants to put it) and the noises being made on the other end of the line. When they decide to end the call, Sam suggests they talk for a while and he reveals that he is a graphic artist and draws Monica to prove it. Their sequence is beautiful, it’s touching and the most romantic of the entire film (unless you count the faked underground car park rape as romantic). Soon their call ends but Monica leaves work with a sense of feeling that something good is going to happen – this pair could very easily have had a film all to themselves.

A Funny Kind of Love is an interesting exploration of sex and relationships, there are points when it thinks its being funnier than it really is and there are certainly moments when it perhaps takes it a little far. But what Lawson and his gang have succeeded in, is creating a witty, edgy, black comedy with moments of depth and delight.

A Funny Kind of Love is in cinemas from 8th May