Much Ado About Nothing Review
Home
Reviews

Much Ado About Nothing Review 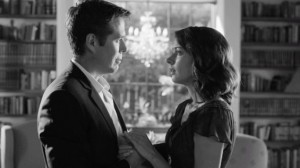 Derek Jarman’s The Tempest, Baz Luhrmann’s Romeo & Juliet and now Joss Whedon’s Much Ado About Nothing represent a body of work, where Shakespeare’s classics are re-imagined for the big screen and a modern audience, taking fully into consideration the alignments and the changes in attitudes and opinions between the original audience and those watching today.

If you have ever watched television or films, you will know that Whedon’s work reverberates through so much of it; from creating one of the most powerful women on television in Buffy the Vampire Slayer to producing and writing one of the best horror films in recent years The Cabin in the Woods and along the way, directing one of the biggest blockbusters of last year The Avengers Assemble, Whedon is a star in American cultural crown. Although he is currently very busy prepping on the sequel to the star studded The Avengers and working on the ABC forthcoming series, The Agents of S.H.I.E.L.D, he also found time along the way to direct and produce one of the most powerful, unique and innovative Shakespeare adaptations ever created.

Lo and behold, Whedon’s Much Ado About Nothing is a credit to his filmmaking because it really proves what can be made on an extremely low budget but with some bright ideas and extremely talented people, a great masterpiece can be born. Made whilst on a break before editing the first Avengers, Much Ado was something Whedon always wanted to do. He called up some of his closest actor friends, people who he made famous through shows like Angel, Firefly and Dollhouse and suggested they have a muck around at his house and record themselves acting out a bit of Shakespeare. But did anyone ever consider that what would come of this project would be this hilariously acted comedy, which is just as affective today as it would have been all those years ago.

For those who haven’t read or studied Much Ado before, the story is primarily about two couples; Hero (Jillian Morgese) & Claudio (Fran 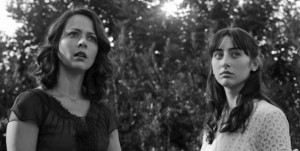 Kranz) and Beatrice (Amy Acker) & Benedick (Alexis Denisof). The former couple instantly fall in love with each other but Claudio relies upon the help of Don Pedro (Reed Diamond) to get Hero’s hand in marriage. Don John (Sean Maher), the brother of Pedro, uses the situation to get revenge on his brother and tells Claudio that Pedro is trying to get Hero for himself. After Claudio confronts him, they quickly resolve the argument as they realise what happened and Claudio and Hero become engaged. Whilst they are waiting for the wedding to take place, the men decide that they want to get Beatrice and Benedick together; the couple, who admit their distain at love and at each other are forced to admit that really they do love one another. The plan ensues to get them together, in a comedic fashion. On the night before the wedding, Don John tells Claudio that Hero has been disloyal and cheated on him before the wedding. They mistakenly catch Borachio court Margaret, Hero’s chambermaid but Claudio assumes it to be his Hero. When the wedding doesn’t go as planned, they decide to fake Hero’s death to get the truth out of the Don John and force Claudio to realise his love for her. Whilst this is happening, Beatrice and Benedick reveal their love for one another.

Much Ado About Nothing is a wonderful story because it is one of Shakespeare’s funniest plays and one, which still today rings with many audiences. The story works much like a soap opera as the story progresses through comic interludes, eavesdropping, miscommunication and finally, love. It is filled with a huge variety of characters and this allows many of the audience to see themselves or someone they know in someone on screen and ultimately this brings the audience closer to the story. Whedon could be described as our generation’s Shakespeare in the cutting edge ways that he brings entertainment; whilst Shakespeare was new and original in his storytelling and the ways that he used the stage, Whedon is pretty much the same, producing work, which may not be to everyone’s taste but certainly work that lasts the test of time and will always find a supportive and loving audience. 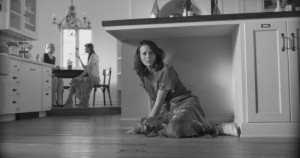 This adaptation of Much Ado pretty much takes place in its entirety in Whedon’s house and back garden, literally bringing the action home – this is an interesting point because many would agree that his best work is on television, which is thought of as the medium that brings the characters into the homes of the audience, this makes the action and story much more personal and the audience really feel as if they get to know the characters. By placing this story in the home, it once again manipulates the audience, it makes them comfortable with the action and allows them to relate it to their own lives. This is an important thing to consider when you learn that the film takes place entirely in black and white and also uses Shakespeare’s own language rather than modern day English. For the first few moments, this is a little disorientating but once the audience immerse themselves into the story and the characters, everything seems to melt away and instead Much Ado becomes a brilliantly successful romantic comedy.

Whilst actors since Shakespeare have marked his work as the cornerstone of acting and storytelling, most see it as important that they can work with these plays; Whedon’s cast throws themselves at this chance and bring it to life completely with an invigorating and hysterical selection of characters. In particular, Alexis Denisof and Amy Acker are completely dazzling as Benedick and Beatrice; they bring to life all the careful nuances of the characters and are able to portray both the comedy and the drama of the story. Two particular scenes, which are some of the funniest in cinema this year, are during the eavesdropping scenes when both are listening to the others talk of their supposed love for one another; Denisof looks as if he is having a great time, throwing himself around outside the window to be able to catch the men talk about him. Whilst Acker plays one of her most physical roles, falling down the stairs before crawling on the kitchen floor and settling under a kitchen cabinet to listen to her cousin and chambermaid talk about her.

Furthermore, Much Ado contains a cast, which is enough to make any geek yelp with joy. Taking names from his previous work, joining Denisof and Acker (Buffy and Angel respectively), is Nathan Fillion (Firefly, Dr Horrible), Clark Gregg (The Avengers), Reed Diamond (Dollhouse), Fran Kranz (Dollhouse, The Cabin in the Woods), Sean Maher (Firefly) and Tom Lenk (Buffy). This is in fact a postmodern miracle and in turn Whedon has become the postmodern poster boy. By bringing together a cast, which spans a huge chunk of his career and making a Shakespeare comedy with them, he is aligning both worlds and causing the audience to make interesting connotations and thoughts.

Much Ado About Nothing is another notch in the Whedon hall of fame proving he can bring Shakespeare back to life, which hasn’t been 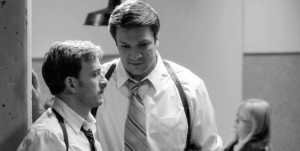 done this well in years. Not only this but he shows that American’s can in fact do an adaptation of Shakespeare and that we no longer have to rely on Kenneth Branagh to be the only person to successfully bring these stories to the big screen. In a daring and unpredictable way, Whedon has retold the story for a modern audience and allows them to easily interact with the original text in a hilarious, beautiful and very touching way.