Suspension of Disbelief On Demand Review 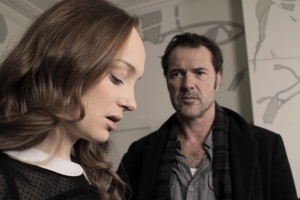 Mike Figgis returns with the brilliant Suspension of Disbelief, where his experiments in the manipulation of time and the blurring of fact and fiction, prove more extreme than ever before. Part sexual thriller and part crime drama; the film follows Martin (the outstanding Sebastian Koch), a screen writer and lecturer who debates with his class the notions of narrative, character and audience expectation; something Figgis is keen to examine throughout the course of the film. His actress daughter, Sarah (the modest but beautiful Rebecca Night) is taking part in a production of one of her father’s scripts but wants to try her hardest to commit herself fully to the script and prove to people her credibility as an actress, rather than just being the daughter of the writer. The script that Martin is currently working on reaches into the dark recesses of his mind, back to an argument with his wife Claire (Emilia Fox) in a crowded restaurant, where she throws wine at him. A casual scene and something, which we have seen many times before on film and yet Martin’s script and in turn Figgis’ filmmaking manages to hit such a delicate and emotional nerve that it views the nuances of what you see on screen further illuminated.

In some sort of reality, which Figgis is trying to portray (constantly moving the metaphorical goal posts of said reality for the audience), his character 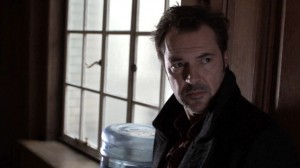 Martin lives alone with his daughter. After the argument with his wife, she disappeared and was never seen again. He holds anger and anguish against her for this and this bitterness runs into his writing. The film does suggest a theory, which was proposed by Carl Jung, in which ‘fact becomes fiction’. This theory postulates that the brain will only see what is placed directly in front of it and will take it for fact – it does not try and work out whether what is being seen is in fact something much larger. This is somewhat ironically used in the opening scene of the film where a girl is erotically touching herself, whilst on the phone. The colour is dark and it appears the film is setting up a noir sexual thriller, something to allow the audience to gauge their expectations of what they are about to watch. Yet, when the camera pans away, we see this scene is actually part of a film, which is being made in the film. As the audience watching, our brains never could have contemplated this ‘fact’ could have been ‘fiction’ until we are shown further details – therefore subverting and alienating the audience’s exceptions of what they are about to watch. Figgis is very much an audience’s director, making the watching experience just as important a part of the experience as the film itself. It seems right to say, that the audience should simply believe each scene they are watching until further exposition is provided. 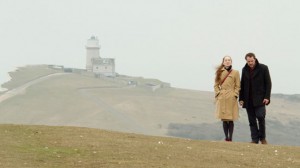 During a birthday party of Sarah, Martin meets Angelique (the simply mesmerising Lotte Verbeek) a sinister but sexy girl whose air of mystery is part of the bigger mystery of the film. The two of them get together in a beautifully shot scene, where the audience become voyeurs to the action, sneakily looking through doors and moving along with them. But the next morning, she is found dead and so begins a gripping mystery in which the film is trying to solve the murder but also get to the bottom of who this girl really was. Her twin sister, Therese, comes along to collect her body but ends up becoming a guest in Martin’s house, staying whilst the police enquiry is going on. Verbeek is incredible in managing to portray the two women so differently; the latter is almost angelic like and her pale skin shines in the bleakness of Martin’s world.

Figgis gently but surely reveals more as the film goes along – that is obvious, and yet he subverts narrative conventions and audience expectations of how the story is going to pan out by slowly blurring the lines between the ‘fact’ and the ‘fiction’. It is easy to get lost and confused in the scenes of Suspension of Disbelief, but surely Figgis is telling you from the title how to watch the film. By allowing the barrier between the two to break down, he is carefully challenging everyone’s understanding on narrative and character. He ruminates on film theories (looking at the concept of structuralism and Proppian analysis), applying them all to this piece of work. It makes for a very clever, intense and interesting piece of filmmaking.

Whilst Therese becomes darker and more seductive as the film goes on, she tells haunting tales of the girls growing up and how Angelique gets her own 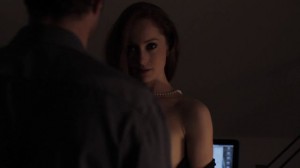 way. She uses her sexuality to get what she wants and doesn’t care who she destroys along the way – again, this was slightly difficult to grasp in a film, which was interested in it’s own representation of eroticism and sexuality and yet never manages to quite go all the way for one reason or another. Despite all this, the chemistry between Koch and Verbeek is illuminating, exotic and wonderfully sensual.