Before I Go To Sleep Blu-ray Review 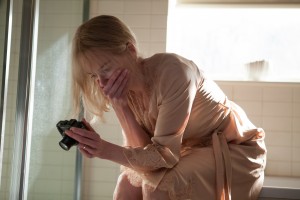 Before To Go To Sleep is a fast paced, out and out psychological thriller lead by the brilliant Nicole Kidman and a horrifying Colin Firth. Think 50 First Dates, but without Adam Sandler or you know… the humour of it all. Based on the novel by S.J. Watson, Before I Go To Sleep is an intimately told story about one woman’s struggle to get her memories back together and remember a life that she never even knew existed.

Kidman plays Christine, a 40 year old woman suffering from amnesia due to a violent incident years before. When she wakes each morning she remembers nothing of her life now. Her husband, Ben (Firth) goes through the same routine with her each day – shows her the photos in their bathroom of their life together, explains they are married and that she was involved in accident which left her without memories but exclaims that she is safe and loved. Ben will look after her. As the film begins, Ben explains that she must pack a bag today because it is their anniversary and they going away together (quite how that will work the next day is questionable) but then the audience are taken several weeks back.

Whilst Ben has been at work, a mysterious Dr Nasch (Mark Strong) has been calling Christine at home. He tells her with some urgency that she must find the camera, hidden in the back of her cupboard and watch the videos. Together Nasch and Christine have been trying to fix memories together and help her remember – he had given her the camera to record how she feels each day and to reveal what she learns about her previous life. But this treatment has been kept a secret from Ben.

As the film goes on, the audience along with Christine are trying to piece together what happened and over time more about her life is revealed but they all seems to be secrets hidden by Ben. Her 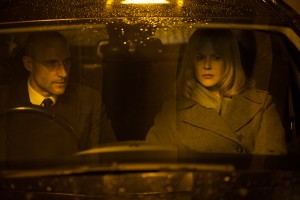 relationship with her best friend, Claire (Anne-Marie Duff), the various things that went on in her marriage with Ben and what happened all those years ago to her, which caused this amnesia. Director, Rowan Joffe, does a fabulous job at melding together flashbacks with the narrative, both inside and outside of Christine’s head as well as keeping the audience on edge throughout and never revealing until the last moments who is good and who is evil. There are several moments throughout, which force the audience to change their opinion on those around Christine as the audience realise the storyteller is unreliable and trying to trip them up. Of course, he places several red herrings within the narrative but none of that takes away from the shocking twists at the end.

The three leads, but particularly Kidman and Firth, do excellent jobs in Before I Go To Sleep. Their chemistry on screen is great; going from Christine believing everything Ben has to say, to suspicion and gradually to making the audience even believe that Ben is bad, they play wonderfully off of one another. Kidman returns to form with Christine, playing this women with a fire that we haven’t seen in a while from her.

Before I Go To Sleep is a classy, intense and Hitchcockian style thriller, though its twists and turns and one that is highly entertaining and keeps the pulse racing until the very final shot.