In A World Review
Home
Reviews

In a World… Review 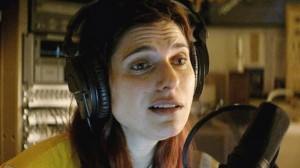 Any movie buff is painfully aware how the omniscient voice in trailers is always male (barring one nugget: Gone in Sixty Seconds, voiced by Melissa Disney).  First time feature writer/director Lake Bell seizes the opportunity to play with this idea and put together one hilarious, heartfelt gem.

Meet Carol (Lake Bell), a struggling vocal coach who is reminded daily by her big movie trailer voice star dad, Sam Sotto (Fred Melamed), that she will never be allowed to follow in his footsteps. That is, until the day she lands a gig for Sunny Delight. Armed with new-found confidence, and with a little help from her nerds at the recording studio, she agrees to be part of the hunt to become the trailer voice for a new female action-packed quadrilogy. Can Carol outperform the competition?

Based on Bell’s personal early experiences in Hollywood as a voice-over actor, In a World weaves in interpersonal relationships with astute honesty and charm. From Carol’s relationship with her sister and husband, to her blossoming romance with Louis (Demetri Martin) her colleague at the recording studio, Carol is likeable and beautifully awkward.

In a World is filled with quotable lines and pitch perfect performances from all involved. Where Bell shines is by reminding us of the sad epidemic of baby voices that is plaguing our world today (mostly in LA, but still): The way women consciously speak in a higher pitch and in question marks to seduce.

Bell proves that she is a force to be reckoned with as a writer and a director. She also shows off her comedic side to perfection. In a World is slick, hilarious and just bloody good! You will leave your screening with a smile on your face and a need to know more about Lake Bell. Don’t miss it.